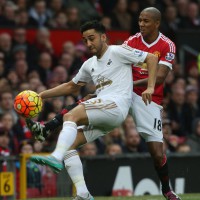 Ashley Young believes Manchester United are still in the title race despite being nine points behind Arsenal.

United ended a dismal run of form that has seen them going without a win in eight games in all competition as they beat Swansea 2-1 at home on Saturday, but they remain way behind the league leaders and could be five points off fourth place should Spurs win at Everton today.

Young, however, remains upbeat about United’s chances of forcing their way back into the frame.

“Until it’s mathematically impossible, we never count ourselves out,” he said.

“Teams are beating everyone around us and there have been some indifferent results. As long as we concentrate on ourselves and keep getting the three points, I’m sure things will be fine.”

Young was one of the standouts performers against Swansea and received a standing ovation when he was forced off the pitch with 10 minutes to go.

“They’re brilliant and it was nice to get a standing ovation,” said the United winger.

“Hopefully I can keep putting in the performances and they can keep singing.”