Why United need a new manager for 2016 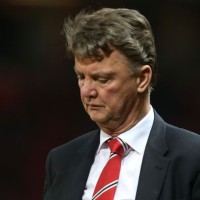 December tends to be the time when resolutions for the upcoming year are put in place and the events of the last 12 months are often reassessed.

However, Louis Van Gaal and Manchester United are unlikely to dwell for too long on what this year delivered and will in fact want to bid it as swift a farewell as possible.

Having started 2015 in third place amid a 10-game unbeaten streak which delivered seven wins in eight games, six of which in a row, United ended the year on a dismal run, which has seen them winless in eight consecutive games in all competitions.

Following an embarrassing 2-0 defeat at Stoke on Boxing Day, Van Gaal looked like a man on the brink of throwing in the towel and resigning, while a growing number of fans clamoured for Ed Woodward to relieve the Dutchman of his duties.

Unfortunately for them, the United chief executive is peerless when it comes to sign up new sponsors, from online casino to watch makers and crisps producers but remains alarmingly out of his depth when it comes to run a football club.

On Monday, United produced an improved performance in their stalemate draw with Chelsea, which saw Van Gaal come out fighting in the post-match conference, as he insisted he retained support from both the board and the fans.

However, while the display against Guus Hiddink’s side was more positive than the calamitous defeats against Stoke, Norwich and Bournemouth it was the fifth time in the last eight home games United have failed to score.

Bottom of the Premier League form table, even below beleaguered Aston Villa, United are four points and 10 goals worse off than David Moyes’ much maligned side was at this stage two seasons ago and a year that had begun promisingly has ended miserably.

Hampered by a catalogue of injuries and playing a kind of football that has verged from dull to dire and downright sleep-inducing, United might be short of world class players but are much better than their current sixth position suggests.

Pep Guardiola will become available at the end of the season and while some suggest the current Bayern Munich manager would favour moving to Old Trafford rather than the Etihad, United can not afford to wait that long.

Under Van Gaal, United run the risk of finishing outside the top four, an unacceptable result in any circumstances for a club of such stature, even more so when considering the Dutchman’s side were top of the table a month ago.

The Old Trafford suits overlooked Jose Mourinho three years ago, deeming the Portuguese unsuitable to the club’s philosophy and ethos.

However, while the former Chelsea manager might not represent a marked improvement from Van Gaal in terms of football, he would surely relish the opportunity to prove his former club wrong and could provide the spark this United desperately need this season.

Van Gaal has steadied the ship superbly after replacing Moyes, but now it’s time for someone else to chart a trip to success.