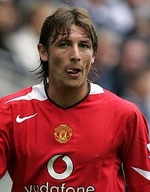 This is outrageous. I am thinking of some harsh words for the Bindippers but I am trying to hold it off for the moment, because, while what they are now in the process of doing maybe deplorable, I want to see this in a more objective manner. Yes, there will be the slight bias, but this is a Man United blog. What the hell do you expect?!

For those, who are wondering what I am talking about let me quote from the report on BBC:

Liverpool boss Rafael Benitez says the club’s lawyers are working on forcing through a Â£6.8m deal for Manchester United defender Gabriel Heinze. […] Benitez said: “We made an offer which they rejected. The lawyers are working on it now so we have to wait.” […] the Reds have met the fee that would secure the 29-year-old Argentine defender’s release – stated in a letter from United to Heinze’s agent.

According to this, the lawyers claim that United have sent a letter to the agent which says that a certain fee would be good to secure Heinze’s move to Liverpool. But the last I remember, a club can have complete discretion over when to sell a player as long as release clauses are not triggered, or such like. The only clause, i.e., the FIFA clause’s deadline had long elapsed and we are yet to actually hear Heinze say that he does, in fact, want to move. Till then, SAF’s word – that we will not sell Heinze to Liverpool – holds.

But that is not the point of this rant. What I really want to talk about is the move from Heinze’s career perspective. He was reported to have said that he was happy and contented living in Manchester. Of course, moving to Liverpool wouldn’t demand a complete change in location. But if he thinks moving to Liverpool would guarantee more playing time then he would be mistaken.

Had he moved last season, he would have been justified. With hardly much quality on their left wing, Riise could have been moved forward with Heinze playing at left-back instead of Arbeloa. (In fact that’s how they actually played at times last season. With Arbeloa playing left back.) This season, however, they have Voronin, Babel among others to lend quality on the left. Which means, Riise will play more in his customary left-back position. Let’s be honest here: Riise is definitely better all-round than Gaby, and has been Liverpool’s mainstay for a long time. With Heinze’s age, he couldn’t be ‘groomed’ as someone to replace Riise in the long run either.

Plus, with Rafa’s history of rotation, a player would be foolish to expect guaranteed playing time, week-in week-out.

All I see here is his agent having plenty to gain from the move, more than anyone else. United lose a quality left-back. Heinze leaves a club he had well-settled in, for another where he won’t get anymore playing time than he used to at United. Even Liverpool will lose the money they might have well spent on some other player for another position. The agent, of course, will get a cut that will help him buy a house or two and that will be it.

So yes, while Heinze’s move would certainly not endear him to United fans, the lack of playing time at Anfield won’t help him from a personal point of view either. Of course, if he really needs more Spanish speaking players around, he might be better off shoring-up the defence of Madrid, who might certainly need someone to plug the hole left by Roberto Carlos.