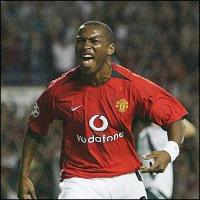 While Seba Veron is often hailed as Sir Alex Ferguson’s most expensive mistake, Eric Djemba-Djemba is the one thrown in our faces as Fergie’s worst signing ever (hell, even Kleberson could play a bit).

He may have cost only Â£2.5m (and earned Â£75k / month) but as a player he was quickly found at the top level. The problem hadn’t been just his playing talents but also his temperament, and it’s a testament to Fergie’s loyalty to his players (or his troubles in offloading him) that Djemba stayed on United’s books for 2 years.

So where is he now? If anyone cares, Sniffing The Touchline has the full story (from Nantes to Qatar SC, via England).

Interview with Ole Gunnar Solskjaer, a true (20)Legend
So How Good Is Ben Foster? — A Watford Fan’s Perspective