We need a central defender more than a central midfielder 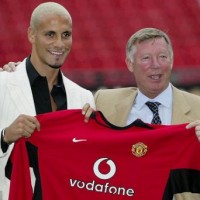 The clamour for Sir Alex to delve into the transfer market for a central midfielder with great passing ability, drive and determination has been ringing in everyone’s ears for a number of years now, but has the need for a new central defender become more important?

Yes it’s true, I’ve been amongst the bandwagon calling for United to make a welcome return to bossing games in midfield with players in the mould of Bryan Robson, Roy Keane and, to a lesser extent but still worth a mention here, Paul Ince.

For the last 12 months I’ve quietly mentioned Victor Wanyama. I think he’ll become the next central midfielder of his type to be coveted by all and sundry within European football, since his performances against Barcelona, a team who have seemingly become football itself, Wanyama has suddenly become the hottest player of his type on the market.

That itself means Wanyama would now cost United far more than the quoted £7M from last summer, it looks likely that figure could inflate closer to £20M, and if that happens, regardless of whether we sign him or not, his name can be added to the ever growing list of players we hesitated to sign then jumped in feet first when it was too late to pay a reasonable fee or simply lost out on.

Now though, with the possible pending departure of Rio Ferdinand next summer and the uncertainty surrounding Nemanja Vidic’s future fitness, I think our biggest most important vacancy is at the centre of defence. 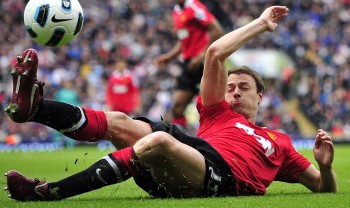 Jonny Evans is good and getting better with every season. It’s my opinion Evans will go on to achieve great things at United but I think he needs a leader next to him, someone he knows is in charge of the dirty work, someone who frees him up to get on the ball and play.

Jonny Evans can play football……and I like that. Nowadays it’s as crucial to be confident and comfortable in possession of the ball as it is to be aware of danger and quick to react to it. Jonny has all the attributes today’s Manchester United centre back requires; just like Rio Ferdinand did back in 2002 when United paid an incredible £34M after fees.

When Rio signed for United he’d totted up combined 181 appearances with West Ham and Leeds, he was aged 24 and an established International. Jonny Evans has so far accrued 134 Manchester United appearances and guess what, he’s just 24 too and a permanent fixture for his country.

When Rio joined United in ’02 he had Laurent Blanc for company at the heart of the defence, who better to play alongside and learn from in your first season at Old Trafford? It would be a huge ask to burden Evans with the role like Blanc’s if United were to bring in a young, inexperienced centre back rather than a proven one.

Chris Smalling is good but his lack of top flight experience is a huge drawback for me, he is however, just 22 years old, in the next 2 years Smalling could easily be where Evans is now, but we’re talking about the here-and-now and he’s just not ready. 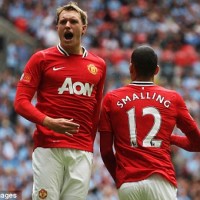 What about Phil Jones? This boy needs to get his career kick-started, get fit and get games under his belt. What he also needs to do is find his position and hone his skills there, if he doesn’t begin to do this I fear his career could follow the same path as John O’Shea’s. O’Shea for me could’ve gone on to be one of the best leftbacks the country has ever seen but his ability in other areas and his willingness to adapt and conform for the team cost him that chance. Whatever Phil is, I hope he finds it sooner rather than later and he’s given the chance to mature there, but again, I’m talking about now and Phil simply isn’t the man right now.

Michael Keane’s waiting in the wings and many United fans are suggesting he’s the next great central defender. They might be right….but now? Or even, for that matter, any time soon? I don’t think so.

Scott Wooton’s another one but with just 3 appearances under his belt at age 21 it’s hard to imagine the boss sees him as a player with the right credentials to forge a meaningful career at Manchester United, hence why I believe Scott will leave for pastures new next summer be that on loan or thanks to a permanent move.

So I guess if Vidic returns the player he was two seasons ago there’s nothing to worry about, but if he doesn’t, I’m concerned. In reality, if there’s even the slightest doubt about Vidic’s return; with money in the bank (that’s a joke!) and the lure of playing for Manchester United, it’s time they went out and located their new man in much the way they did when they finally got serious about finding a replacement (not directly) for the hole Jaap Stam left instead of making do with a number of makeshifts such as Silvestre, May, O’Shea and Brown.

If United don’t purchase a new central defender we’d go into 2012/13 with the following options.

Is that good enough? Even if you add a delicate Rio Ferdinand, an inexperienced Scott Wootton and don’t ignore Vidic’s advancing footballing years and ability to stay fit to that list, it still needs strengthening.

There aren’t that many suitable names out there at the minute but everyone will have their own favourite in mind, who’s yours?

The one stand out candidate for me would have been Gary Cahill but again that bird has flown. I like the look of Italy’s Angelo Ogbonna and I don’t think Rolando at Porto’s too shabby either.