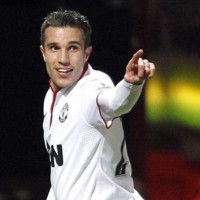 The last time United played a cup game under the floodlights at Upton Park, both the performance and the cold were so disheartening that very few of the thousands that had traveled to London would have cherished memories of that day.

Despite more accomodating weather conditions and a much improved performance, today’s game wasn’t going to be remembered either by the traveling fans, as United were three minutes away from suffering defeat and the ignominy of a third round elimination for the first time since Jermaine Beckford netted the winner at Old Trafford three seasons ago.

Time and again this season, when the odds were stacked against them, United have turned to Robin Van Persie and the Dutchman got his club out of jail again, after West Ham had raced into a deserved 2-1 lead, thanks to two headers from James Collins, who had been living his own personal FA Cup dream until Van Persie’s finish forced a replay for this third round tie.

Ryan Giggs, who had missed the chance to equalise seconds earlier, picked out Van Persie with a superb lofted pass over the West Ham defence as the Dutchman peeled off James Tomkins to create himself enough space to control the ball with his right foot before slotting it in the far corner past Jussi Jaaskelainen.

It was a goal of sheer beauty and panache, but one that had looked extremely unlikely, for United after falling behind with 30 minutes left had huffed and puffed to no avail and the home fans were already savouring a famous win when Van Persie struck.

The former Arsenal striker was named on the bench, as Sir Alex Ferguson reshuffled his team as widely anticipated before kick-off. Smalling, Vidic, Evans and Buttner formed the back four in front of De Gea, with Rafael pushed forward, on the right side of a diamond-shaped midfield containing Paul Scholes, Shinji Kagawa and Tom Cleverley while Hernandez and Danny Welbeck were deployed up-front. 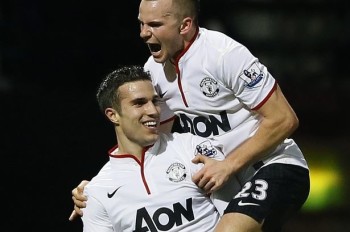 The opening exchanges were vibrant, with Hernandez failing to get on the end of a good cross by Chris Smalling, before the two teams exchanged goal line clearances. With 11 minutes played, Paul Scholes prevented Diarra’s header from crossing the line, as did Dan Potts nine minutes later when Vidic’s header had seemed goalbound.

Halfway through the first half United were ahead thanks to the sort of goal that would have had advocates of the passing game jubilating. Hernandez exchanged passes on the right touchline before squaring the ball across the box towards Tom Cleverely whose run had not been tracked, allowing him to curl the ball into the far post to put United ahead.

United could have gone ahead again ten minutes after the equaliser but Welbeck’s shot was saved by Jaaskelainen after the United striker had orchestrated a brilliant solo counter-attack. Tom Cleverley then spurned a chance to secure his second goal of the game when he shot high from the edge of the box straight after the restart.

With an hour gone, Cole and Collins produced a carbon copy of West Ham’s first goal – the defender was again left totally unmarked in the box and headed past De Gea, who was fuming with Nemanja Vidic for allowing Collins the second free header of the game.

Valencia and Van Persie replaced Scholes and Hernandez, while Giggs  was introduced for Smalling later on, but United looked far from threatening, as West Ham controlled the game with ease, helped by Kagawa’s poor performance as the Japanese, who had struggled to get into the game, was caught in possession a few times.

Then, just as Sir Alex Ferguson was contemplating a ninth year without the FA Cup and the home fans were in full voice, Robin Van Persie took centre stage. And when he does, he very rarely disappoints.