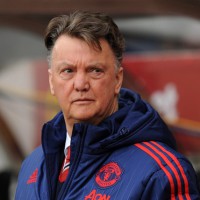 A season punctuated by too many lows and very few, if any, highs plunged to a new whole on Saturday.

Arrived on Wearside on the back of their three best performances of the season and facing a Sunderland side stuck in the relegation zone, Manchester United reverted to type and produced a performance of such ineptitude that any talk of a top four finish must now surely be taken as a practical joke and nothing more than that.

If United’s return to Champions League was short-lived and ultimately destined to end in disappointment, their quest to clinch a top four finish this season has petered out even more swiftly as Louis Van Gaal’s side catastrophically imploded over the last three months.

Six points behind fourth-placed Manchester City, their confidence shot to pieces, United have all but given up any hope of reaching what should be the minimum requirement for a club the size of United.

Even Van Gaal and Wayne Rooney were no longer interested in entertaining the utopia of a fourth-place finish and candidly admitted United’s best chance to be involved on Tuesday and Wednesday nights next season was to win the Europa League.

A noble sentiment, one might suggest given the number of big clubs that routinely seem to take the competition as a nuisance, but a clearly misguided one at that, even though Van Gaal’s side are third-favourites to win the competition.

Odds on United to win the Europa League fluctuate between 8/1 and 11/1, with all bets available to be tracked via Betbind.com, and while they’ve nothing else to play for this season apart from the FA Cup, life in the Europa League won’t be easy for Van Gaal’s men.

United could not get out of a Champions League group that was far from the hardest in the competition, for while it contained the defending Dutch champions and teams that finished runners-up in the Bundesliga and the Russian Premier League, it did not seem to pose any particular challenges.

By contrast, should they progress to the next round in Europa League, which would be an achievement in itself given the current travails, United could face one between Spurs and Fiorentina or serial Europa League winners Sevilla.

And that’s without even considering Borussia Dortmund, the current bookies’ favourite and Napoli, who are currently pushing for their first Serie A title since 1990 and are second-favourite to lift the trophy, while Liverpool’s odds are just slightly longer than United.

A Champions League spot awaits the side that will lift the trophy in Basel on 18 May, but United face an uphill task if they’re to be that team.