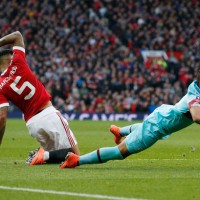 Louis Van Gaal has accused Dimitri Payet of diving just before scoring the opener for West Ham on Sunday. The Frenchman had already been booked when it went down after making contact with Marcos Rojo in the box, only for Martin Atkinson to deem the contact not worth of a penalty.

However, given that Payet was already on a yellow card, some suggested he should have received a second yellow. Minutes later, the Frenchman netted a fantastic free-kick to give West Ham a 1-0 lead, before Anthony Martial rescued United with seven minutes to go.

“Payet was more or less diving. He was maybe touched, but not enough to fall like that,” said Van Gaal.

“But there are always discussions about the decisions of the referee.”

Slaven Bilic, however, had a different view of the incident.

“For me, it should have been a penalty on Dimitri,” said the West Ham manager.

“A dive? Come on. If you have a screen I am going to show you and defend my point at Cambridge [Union].

“You can clearly see there is contact. So it’s definitely not a dive, 100 per cent not a dive.