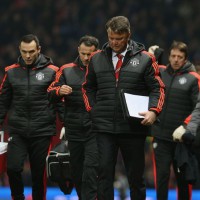 Louis Van Gaal said he was proud of his players’ effort despite seeing his side getting knocked out by Liverpool in the Europa League on Thursday night.

Trailing 2-0 going into the tie, United went in front through an Anthony Martial’s penalty and, for a brief moment, looked like they could turn the tie around. Those hopes, however, vanished when Philippe Coutinho equalised just before half-time, leaving United in need to score three goals int he second half.

“I am not angry and I am not frustrated,” Van Gaal said. “I was very proud of my players. I was very pleased that the fans also recognised that.

“They applauded after the match despite the fact we were out of the Europa League. That was remarkable, I think.”

The United manager added United had thrown everything at Liverpool and will live to regret some of the chances they missed.

“We have played like Liverpool played in the home match at Anfield,” he said. “We have done that. We have created a lot of chances in the first half. We scored a penalty and then had chances from [Jesse] Lingard, Juan Mata, Fellaini.”

LVG: “We owe a big performance to the fans”
United and Mourinho agree pre-contract deal