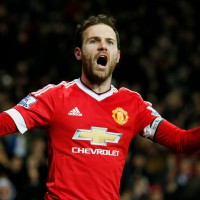 Louis Van Gaal has described the decision to hand Juan Mata the captain’s armband in Wednesday 1-0 against Watford was an easy decision given the Spaniard’s experience.

With Wayne Rooney, Chris Smalling, Michael Carrick and Bastian Schweinsteiger all unavailable, Mata was named captain for the night and repaid his manager’s faith by scoring the crucial winner seven minutes from time.

“It was not difficult because I have an elder group of players with whom I’m talking about aspects of things – training sessions, meetings or how we have to approach players and so on,” said Van Gaal.

“Juan is a member of that group with the three captains – Rooney, Carrick and Smalling – and Schweinsteiger as well, so it was an easy choice for me.”

Rashford: “I can’t explain this feeling”
United coach against Rashford’s England call up