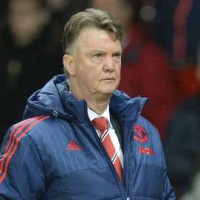 Backed by over 5,000 reds, the largest away allocation of the season, United beat Derby 3-1 and booked their place in the fifth round of the FA Cup and the boisterous away support didn’t go unnoticed with Van Gaal.

“Our fans supported us fantastically. I heard the fans of Manchester United more than the fans of Derby County,” he said.

Van Gaal allegedly offered his resignation after United suffered an embarrassing defeat at Stoke on Boxing Day and he warned Mark Hughes’ side would be difficult to deal with on Tuesday night.

“I hope that we can give the same level of performance as against Derby,” said the United manager.

“Stoke City are a team that every club has a lot of difficulties with.

“I saw them play against Liverpool and thought they were very good – they deserved to go through. I have to say that I like how Stoke play, very much.”