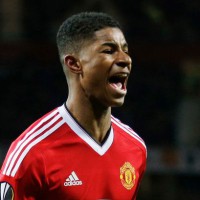 Louis Van Gaal praised the character of his young players after a largely inexperienced Manchester United side beat Midtjylland 5-1 on Thursday night to book themselves a place in the draw for the Europa League round of 16 after winning the tie 6-3 on aggregate.

Anthony Martial was the latest United player to suffer an injury, as he complained of a hamstring problem during the warm-up, but the Frenchman was brilliantly replaced by Marcus Rashford, who scored twice on debut to swing the tie his side’s way.

“I didn’t have another option, so Rashford had to play,” Van Gaal said. “The reason he was on the bench in the first place is because he is an ideal substitute for Martial.”

“We put in a fantastic performance and that is a great compliment to the guts of the players, especially the younger ones. It cannot have been easy for Rashford and Joe Riley to make their debuts in European competition, with the pressure of knowing we have to win, but they hit a fantastic level. They might not have been expecting to make the first team so soon, but they have just completed an unbelievable step in their development.”

Van Gaal has been rightly criticised for a number of reasons this season but his decision to promote youngsters into the first team, Guillermo Varela played at right-back for his sixth appearance while Joe Riley made his first start at left-back, is surely to be admired.