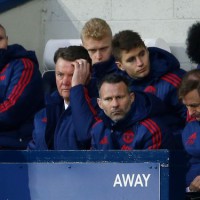 Louis Van Gaal has added yet another entry to the list of baffling statements by claiming Manchester United trailing Leicester by 19 points is what makes football beautiful.

The United manager has spent over £250m in his first two seasons at the club but refused to consider the gap between his side and the league leaders as embarrassing, claiming instead that the achievements of Claudio Ranieri’s side proved football’s unpredictable nature.

“I don’t think it is embarrassing to be so far behind Leicester,” he said.

“Football is a sport and what Leicester are doing makes sport beautiful. It means the money is not always dominating.

“It is about the quality of a team and Leicester is an example of a how to play like a team. I can only give a big compliment to the manager and his staff.”

Last season, United ended the season with 70 points, 29 ahead of Leicester, scoring 16 goals more than the Foxes and conceding 18 less. As it stands, Van Gaal’s side could reach a maximum of 74 points this season in the unlikely event they won their remaining nine games, while Leicester only need four points from the next seven games to surpass United’s point tally from last season.

Claudio Ranieri’s men have conceded 31 goals, only four more than United, but have scored 17 more so far, albeit having played two more games.