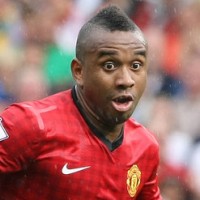 Last night Anderson produced a performance to make people sit up and believe once again that the young Brazilian midfielder is possibly ready to take his chance at Old Trafford and work his way into the thoughts of Sir Alex Ferguson.

United take on Spurs in the evening kickoff at Old Trafford this Saturday and Anderson must now stand a chance of starting after his powerful, all action display against Newcastle United in the Capital One Cup saw United advance to the next round where they’ll face Chelsea.

Looking fitter and leaner than ever, and looking hungry to get on the ball and run through the heart of midfield and defence, Anderson displayed the sort of attacking talent that convinced United to purchase him from Porto in 2007  in a rumoured £20M deal, at a mere 19yrs old.

Anderson began his United career in decent form and soon won the adoration of the Old Trafford faithful after a wonderful performance against Liverpool saw him boss the middle of midfield and keep Steven Gerrard tucked nicely away in his pocket.

But, as a flamboyant attacking midfielder previously, why did Sir Alex attempt to redesign Anderson as a defensive style central midfielder? In my opinion Anderson is one of a list of players who have paid the price for their ability and willingness to adapt to a new role and accept the manager’s decision rather than stick to their guns and become the best man for their job in their professionally preferred and practiced position. Unfortunately for Anderson (and for others), it’s a decision that backfired and took until now to shake off.

Anderson loves nothing more than to receive the ball at his feet, get his head up and look to attack. For me Anderson has vision and craft and, along with Tom Cleverley, the ability and natural instinct to think two to three passes ahead, hence their almost telepathic link play at the beginning of last season.

Anderson’s reputation has plummeted over the last couple of years thanks to what appears to be a penchant for a pie or seven, the lure of a party and thus a lack of apparent fitness leading to below par performances when given the opportunity. Could it be he lost his confidence too? I think so.

Perhaps, after last night Sir Alex will hesitate before removing Anderson from the starting line-up and we’ll get to compare him with a player many courted as the solution to United’s problems over the summer in Moussa Dembele.

Anderson and Dembele are similar players, they both play a direct running game from deep and have the touch to unlock defences in the final third or, as Anderson proved last night, the ability to smash one from distance when the chance presents itself.

Too many players over the last few years have found their chances at Old Trafford scuppered by being played out of position or by being asked to do their job in a way that was previously alien to them. Michael Carrick for one, Valencia another and Dimitar Berbatov’s treatment is a total travesty. Rafael utilised in midfield (which signalled the final nail in Paul Pogba’s coffin at United) on Boxing Day last year in a costly 4-2 defeat at home to Blackburn, John O’Shea, Phil Neville and now look at Phil Jones.

It’s great players have an understanding (in fact it’s crucial) of how to play different positions and what responsibilities playing those positions entail, but at this level and with the availability of cash and big wages, I’d prefer to see round pegs used in round holes, the right horse for the right course, a dedicated player in a dedicated position to fulfil a dedicated role…..is that too much to ask?

I really hope Anderson gets a start on Saturday and hope more he doesn’t let himself down. Well done Ando, good luck son.