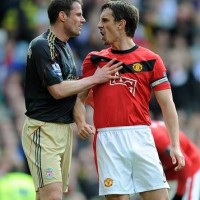 On the pitch however, Liverpool will find United in no way welcoming as they staunchly protect their 7 game unbeaten run assisting them hopefully on the way to furthering their record breaking 19th league title. If our betting prediction partner Betegy are to be believed, United have a 33% chance of putting three past the scousers in Sundays early afternoon showdown at Old Trafford.

In the last 10 seasons United have been beaten by Liverpool at Old Trafford just twice, winning the other eight contests with a superior goal difference of +14 overall.

This season United already sit 21pts ahead of their rivals and look ominously on target to increase their title haul while Liverpool’s wait for a title fast approaches 23 years.

Remember the shit we used to endure for waiting 26yrs? What goes around comes around. I hope I never have to see them lift another one again.

With no fresh injury worries and no midweek game, Sir Alex approaches the game with an almost fully fit and rested squad. At his presser today Ferguson intimated that Wayne Rooney was in training and would hopefully make the cup replay next Wednesday. But is that just a smokescreen? He went on to admit that Wayne’s injury was ‘straightforward’ so don’t be too surprised if he starts come Sunday.

Anderson and Nani return to the squad for Sunday as does Phil Jones. But Jones, Ferguson says, is more likely to feature on Wednesday.

Betegy give United a 45% chance of winning, so their odds of 1.8 across the bookies means they’re a definite value bet in amongst your accumulator.

With a full squad to choose from you have to think Sir Alex’s starting XI will be heavily swayed by current form with the main instruction regarding the opposition being ‘watch Suarez’, much in the way the instruction v Swansea would have been ‘watch Michu’. We failed to stop Michu that day, hopefully Sunday will be different. 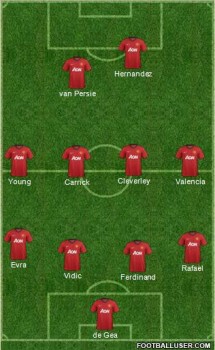 That could spell trouble for the woefully out of confidence Antonio Valencia. I’ve no idea what’s got into him recently but he appears to have lost the power of thought! He just can’t beat his man, he stands still thinking what to do before running into his marker! Nani you feel could feature if Sir Alex removes Valencia although my guess is he’ll persevere with Valencia in the hope his form returns.

Defensively I think Ferdinand will return to the middle to partner Vidic with Evans sitting out until Wednesday. Rafael should continue at rightback with Evra on the left.

Midfield could be anything, Sir Alex could opt for Scholes and Giggs although I’m sure we sincerely hope not! More likely Carrick and Cleverley with support on the left from Ashley Young or the evergreen Ryan Giggs.

Presuming his Rooney remarks were not a smokescreen and given the tremendous form of Hernandez, I guess Hernandez will partner RvP up top in what’s fast becoming a deadly partnership.

Any fixture between these two clubs requires guts and character and players with the ability to mix it up, if you don’t, you find yourself on the end of a defeat, simple.

How do you see the game going? Are United a shoo-in for victory on Sunday or is this a weekend we make a mistake?

My prediction- 3-1: Given Liverpool’s ability to score (scored in 7 of their 9 away fixtures) and United’s sometimes shambolic defending, I’m going with Betegy and their 3-1 scoreline. Good luck.