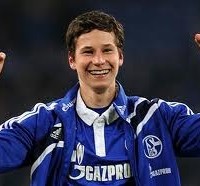 With the news that Schalke CEO, Clemens Tonnies, has stressed that the Bundesliga side will not deny Julian Draxler a transfer to a club like Real Madrid or Chelsea if the opportunity arises it’s time David Moyes was coerced into making contact with the tremendously talented young German.

The U19 International recently admitted that it would be hard to reject one of Europe’s superpowers if they were to make a move for him and Tonnies has insisted that S04 are ready to open talks if a good offer comes in.

“It is not necessarily a bad thing when a club like Chelsea are interested. Julian is an important player for Schalke and we obviously want to hold on to him,” Tonnies said.

“However, if you want the best for someone, you will have to consider allowing him to move abroad at some point.

“What are we supposed to tell Julian when a club like Real Madrid make an enquiry for him? Tell him not to speak to them? That would simply be ridiculous. Those days are behind us now.”

Draxler signed a contract extension with Schalke until June 2018 earlier this summer and I originally believed the line that he was to spend at least another season with Schalke. Now it appears those words were a smokescreen and Draxler could be on his way out for the right price.

If anyone is yet to appreciate the talent Draxler has I’d urge them to dig out some footage and watch it with those images of Ronaldo tearing United apart as a skinny kid in a friendly with Lisbon a few years ago in mind. A performance which led Gary Neville and Co to encourage Sir Alex Ferguson to and buy the kid at any cost.

It’s a shame United never met Schalke in the CL recently to offer such a scenario repeating itself.

In my opinion Draxler has the potential to become the most exciting attacking midfielder in Europe over the next five years and I’d love to see United to benefit from that potential and nurture him into the World Class star he will be. Would I put his signature ahead of someone like Alcantara to strengthen central midfield(?), no. But, if there’s a few quid spare to compete for his signature he’d definitely be the second most important target on my list, certainly ahead of an overpriced Leighton Baines.

An eye for goal, a hard worker, pace to burn, bags of tricks and a direct attitude make Draxler the ‘One-to-Watch’ wherever he’s playing next season. Will it be the Premier League, will it be La Liga?

Should United be interested in him? Have your say……

Where do United go from here?
United ready to increase bid for Moyes’ target