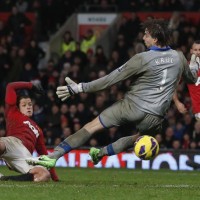 West Bromwich Albion will attempt to become the next team to highlight United’s central midfield deficiencies as they travel to Old Trafford for the third of four festive fixtures today.

Both teams enjoyed Boxing Day victories versus Newcastle and QPR respectively in games where both sides scored. So far this season the two teams have mustered just 8 cleansheets between them in 38 games. The Albion have conceded 5 goals fewer than the Reds at this point but scored a whopping 20 fewer!

All recent form points squarely to a high scoring match, add to that the poor condition of the Old Trafford pitch and the sometimes shambolic United defending, Betegy prediction of 2-1 looks a far likelier outcome than a stalemate.

Since the Premier Leagues inception these two teams have met six times at Old Trafford with United dropping just four points. Albion achieved draws in 2005 and in, more memorably, 2010 when United dropped their only points (at home) of the season to a valiant West Brom side that were already showing signs back then that the improvement they’re displaying this season was on the way.

That day Edwin van der Sar made a rare mistake to gift Albion a point, this day will probably see David de Gea keep the number one spot despite his calamitous schoolboy error which lead to Newcastle’s opening goal on Wednesday in just the third minute.

Since the departure of EvdS and the arrival of Lindegaard and de Gea there’s been a battle for supremacy between two keepers who aren’t good enough to warrant the number one spot hence why there’s been rotation. Despite the rotation and constant murmurings of discontent amongst fans, last season United kept 19 cleansheets compared to 15 the previous season with EvdS between the sticks. This season however, United have kept a paltry three cleansheets and, perhaps most remarkably, just 2 at home in 9 games. 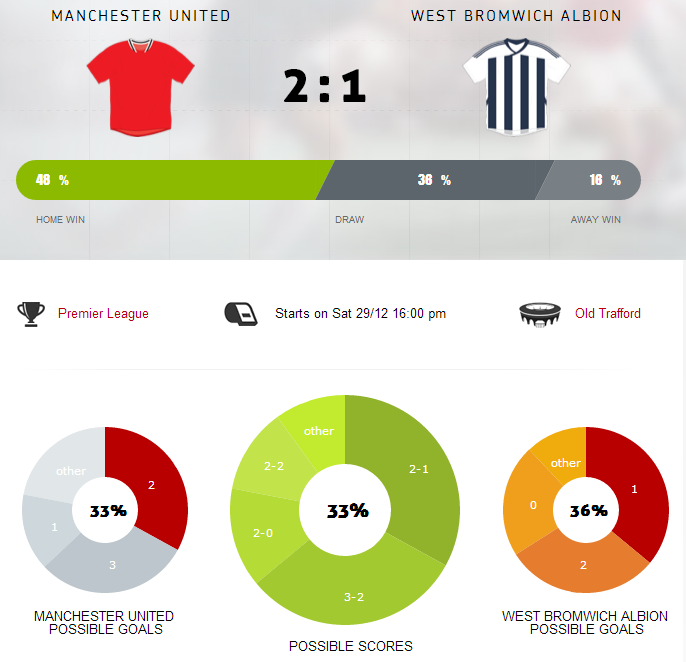 Football as we know though is a game of numbers, therefore, if you allow teams to win midfield and leave the defence exposed to wave after wave of attack then conceding goals becomes inevitable. There were huge gaps in the centre of midfield against Newcastle, at times it appeared as if United were playing a man light. Add to that the number of times the once fantastic Paul Scholes gave the ball away cheaply and you begin to understand why we leaked three goals against a team with one of the worst away records in the league thus far.

I’ve never witnessed a team play with centre halves as their prominent playmakers the way United did on Wednesday, it was laughable but more seriously it was worrying. Both Evans and Ferdinand looked up with the ball at their feet to see no one showing for the ball and no runners more times than Hernandez was caught offside! Evans surged forward with it time and again but Rio opted to spray longer passes which generally went nowhere near its intended target.

Some of United’s problems in defence for me come down to a lack of leadership and a lack of width. All our defenders are central (thinking) defenders bar Rafael, and I include Evra in that. Evra only begins to think like a wide player once we’re in possession of the ball. While we’re out of possession and under pressure near our own box Evra often has a tendency to get drawn into the middle leaving wide open spaces behind him.

Yes yes Evra’s scored four times this season, more times than he’s scored in all his previous United seasons, that’s all well and good but I’d prefer to see him concentrate on his defending, we have enough fire power up top.

During Sir Alex’s explosive press conference yesterday he mentioned how Scholes could have another year or two in him. I hope he was joking first of all and secondly I hope for Pauls sake he calls it quits for real in the summer because he’s beginning to tarnish his reputation with increasing speed.

Sir Alex couldn’t give any update on injuries or the fitness of the squad during his presser. The team, he said, will be made up of players who were fit enough after an energy sapping match on a very heavy pitch which took its toll on a few members of the squad. You have to think that would rule out seeing Scholes and Giggs starting again (thankfully) and the return of Cleverley although the abscence of Young and Nani could force Sir Alex into sticking with Giggs on the left unless he feels Welbeck could do a job there after recovering from illness. Perhaps we could see Powell today?

Shinji Kagawa is ready for consideration and will likely make the bench. Vidic I imagine will replace Ferdinand and play alongside my Player of the Season (behind van Persie) so far, Jonny Evans. 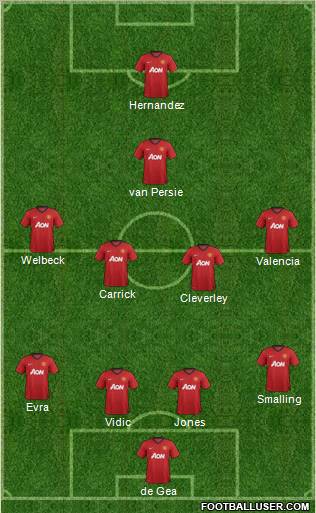 Phil Jones hasn’t been passed fit so Smalling you would think will continue at right back. If that’s the case and Valencia starts on the right again, I hope the two of them strike a better understanding than they did on Wednesday when they barely linked up successfully.

Valencia appears to have lost the confidence to knock it past his opponent and deliver quality balls into the box lately although later on in the Newcastle match he did find Hernandez with a fantastic run and cross.

As for Hernandez, the boss steeped praise on the lad for his work ethic and non-stop performance on Wednesday. Personally I think he’s being a little kind to the lad who didn’t come alive until the final thirty minutes, when he did though, he was excellent.

Rooney’s still out and will be for “at least two more games” according to Sir Alex so my guess is RvP and Hernandez will continue their partnership.

As for West Brom, Steve Clarke rested Shane Long and Peter Odemwingie on Wednesday to allow his best front pairing to be fit to face us. The in form Chris Brunt is the one to watch for me though, both he and James Morrison have impressed so far this season.

Betegy go 2-1 for this with 3-2 a close possibility (33% & 32% respectively), I think the picth will play its part again today as it’s still chucking it down in Manchester as we speak. Given that and both teams ability to score, this could be any score you want including another 4-3.

My prediction? Another hard fought win on a terrible pitch where allowances have to be made for mistakes. I’m going 4-2 United with a hat-trick for Hernandez.

What do you think?

Why not open a Betegy account today? It’s free to register and offers incredibly accurate precictions on the Premier League, La Liga, The Bundesliga, Ligue 1 and Serie A.

The Swan to Watch for United
United welcome Suarez & Co