United on a high – and on a revenge mission 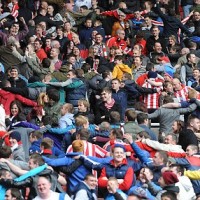 The calm after the storm has made for an enjoyable week for many Reds left taunting their blue counterparts thanks to Robin van Persie’s late defected winner at The Etihad last Sunday afternoon.

This weekend sees Sunderland – a team deep in trouble with a manager under pressure – travel to Old Trafford to take on a United whose manager will be desperately hoping his troops do not suffer from a Derby Day hangover.

United have been made 5/1 ON favourites to beat Sunderland on Saturday and Betegy.com make them their ‘Recommended Bet’ of the weekend.

Betegy go a step further than just predicting United will win. They forecast a scoreline of 3-1 to United has a 33% chance of coming in, so with odds around 9/1 you’re getting value for money.

The last time Sunderland left Old Trafford with all three points United went on to win the European Cup and Manchester City went on to win the league. That was 1968, the defeat to Sunderland on the final day of the season literally cost United the title just a few days before their epic 3-3 semi-final draw with Real Madrid.

A word of caution though, United haven’t had it all their own way at Old Trafford since then with Sunderland getting draws in 9 out of 25 fixtures at Old Trafford in all competitions since.

Current form suggests Sunderland are there for the taking with just 1 win in 10 before their midweek victory at home to Reading on Tuesday. United have failed to put more than 2 past Sunderland since 2002 whereas in the years running up to that the floodgates regularly opened allowing United to hits 3’s, 4’s a 5’s with ease.

I’m sure it’s still fresh in the minds of both players, management, staff and fans alike that Sunderland laughably mocked United’s dramatic last minute loss of the title last season after United had beaten Sunderland to become Champions only to watch on as City stole the show.

United don’t forget these things. Saturday is the first time we’ve have had a chance to serve vengeance and I expect it’ll be a dish served colder than the freezing temperatures on offer in Manchester lately.

As far as scoreline goes I’m happy to predict this is where United put their foot on the gas and use the belief gleaned from Sunday to bulldozer their way through the Xmas period. I think Sir Alex saw the light last weekend and there’s no turning back, that isn’t to say we won’t see the reappearance of Scholes or Giggs this weekend but when faced with a must win game – and have some unfinished business to attend to – I think Sir Alex begin to settle on a far more settled and trusted XI – I think he’ll see this game as one of those.

We’re due a big win against these and it’s been a while since the Old Trafford faithful witnessed a pummelling, for that reason I’m personally all over 4-0 with a brace for van Persie plus one each for Rooney and Welbeck.

Without any team news it’s difficult to predict a team but who do you think will get the nod if fit and what kind of result are you expecting?

Why not join the Betegy.com revolution? It’s free to register and you’ll receive accurate predictions for football games throughout Europe. So if you’re a gambler like me it’s well worth at least giving it a trial run.

City v United – Confirmed Lineup – with surprises!
Manchester United will hope their luck is in as they welcome the Black Cats to Old Trafford