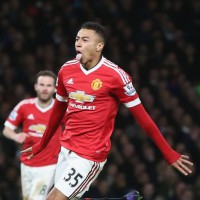 Jesse Lingard has admitted he has spent the last couple of weeks putting in extra training sessions to improve his finishing, after being instructed by Louis Van Gaal to be more composed in front of goal.

The 23-year-old scored a brilliant, if ultimately not winning, goal against Chelsea on Sunday and has looked a lot sharper in the final third since his miss against Newcastle a few weeks ago arguably costed United the game.

“I work on it [finishing] in training and obviously after training,” Lingard told the Manchester Evening News.

“Especially after the Newcastle miss, I’ve worked hard on the training pitch and it came off today.

“He [Van Gaal] just said show more composure and control, control the ball before you shoot.

“I was very happy with the finish [at Chelsea] and it was just instinctive to turn and hit it. It was a great feeling but, at the end of the day, we didn’t get the three points.”

The youngster’s display at Stamford Bridge came after a series of mixed performances, with disappointing displays at Newcastle and Liverpool followed by goals against Stoke and Chelsea.

“From the first minute I got on the ball and tried to make things happen, and luckily I got the goal,” he said of his performance on Sunday.

“But it was the three points we wanted.

“The boss has said that I’m getting back to my form now from what I had before my injury and I need to keep kicking on.”