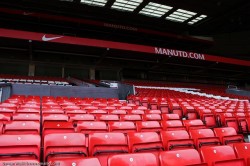 Earlier in the summer, United fans received an email or a letter from the club, asking the fans to show they were “100% committed” and renew their season tickets or memberships.

I’m not too sure about the fans’ commitment but, after last night’s scandalous prices, we can safely say that the club is “100% committed”. Committed to rip us off.

Despite the League Cup being – understandably – the last of United’s priorities this season, which means that fans get treated to a combination of first team’s fringe players and a few young lads from the Reserves, United still charged full price last night, with the cheapest ticket at £30, the most expensive worth £52 (!) and an average price of around £40.

Considering the prices and the occasion, a crowd of 46,358 isn’t perhaps as disappointing as it would have normally been considered, but it was the perfect opportunity to bring back some of the many fans that have felt alienated from the club for a few years and it was sadly and regrettably missed.

At Old Trafford last night, kids were charged £12, and 16 to 21-year-olds could get a ticket for £22 a pop and if clubs with stadiums considerably smaller than Old Trafford can afford to have tickets on sale for £10, why can’t we?

For a club so focused on delivering a strong brand image and who targets the market so aggressively, last night’s effort was really, really poor in terms of PR.

£50 for the League Cup, tourists in the United end at almost every away game now, just another disgusting behaviour from the Glazers, as they continue to squeeze the life out of our club. Are you “100% committed?”