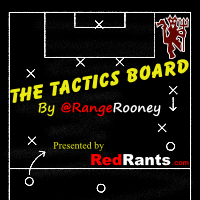 A fairly dreary game that wasn’t much of a tactical battle, Manchester United’s 2-1 victory over an embarrassingly uninspired Arsenal team was still 3 important points for the Red Devils. Arsene Wenger’s squad was missing some key players, such as Abou Diaby and Kieran Gibbs, but that still doesn’t explain such a poor performance by a squad that most neutral observers would admit plays some entertaining football. In the past 3 weeks, Arsenal has lost 1-0 to Norwich City, 2-0 to Schalke, had to come back from 4-0 to defeat Reading 7-5, and claimed a 1-0 victory over a 10-man Queens Park Rangers. Arsenal brought this extremely poor run of form into Old Trafford to take on an extremely dangerous Manchester United squad, fresh from a 3-2 victory over league leaders Chelsea a week earlier.

Manchester United (4-4-1-1)
Sir Alex Ferguson decided to stay with the same formation he used a week earlier to defeat Chelsea, opting to play with 2 traditional wide players instead of a midfield diamond. In a rare move for Fergie over the last few years, the same squad started two weeks ago. Ashley Young started on the left wing, while Antonio Valencia started at right wing. Robin Van Persie started as the lead striker, with Wayne Rooney playing just behind him in a trequartista role.

Arsenal (4-3-3)
Arsene Wenger played his team in a 4-3-3, but he used the same players that use used against QPR a week earlier. Vito Mannone continued his stint in goal, with Per Mertesacker and Thomas Vermaelen ahead of him at center-backs. Bacary Sagna started at right-back, and Andre Santos started at left back. The midfield consisted of Mikel Arteta, Jack Wilshire, and Santi Cazorla, while Olivier Giroud started centrally up front. Supporting the French striker was Lukas Podolski on the left wing, and Aaron Ramsey on the right wing.

Manchester United’s middle
Manchester United came out in a 4-4-1-1, and they got off to the same strong start that enabled them to take a 2-0 lead within the first 12 minutes at Stamford Bridge a week earlier. The Red Devils used the 4-4-1-1 to great success last season, but it has been more effective this season as Sir Alex Ferguson can play Robin Van Persie in front of Wayne Rooney. 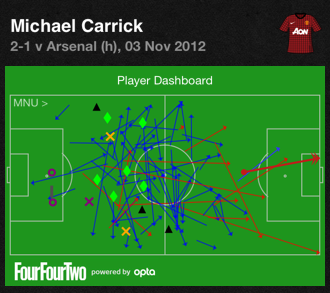 Michael Carrick played deep in the central midfield, covering the back line defensively while also functioning as a deep lying playmaker. His main responsibility was to help play the ball out of the back, while also moving the ball laterally from wing to wing to spread out the Arsenal’s defense. He had a very effective game, completing 84% of 77 passes. His 77 passes were the second most passes in the game, but he wasn’t just effective at short passes. He was successful with 8 of his 12 long passes, which enabled him to spread the ball quickly from side to side and create chaos for Arsenal’s defense.

Playing alongside Michael Carrick was Tom Cleverley, who functioned as more of a shuttler. His job was to drop back and assist Carrick in playing the ball out of the back, but he was also responsible for getting forward near the penalty area on the attack. While this wasn’t one of Tom Cleverley’s best games, his energy and work rate were needed, especially on defense.

Robin Van Persie provided a very dangerous scoring threat up front, just as he did against Chelsea, but Wayne Rooney’s role changed from what he played at Stamford Bridge. Against Chelsea, Wayne Rooney played very deep, as almost a central midfielder. This allowed the Red Devils to ensure they weren’t outmanned in the middle of the pitch by Chelsea’s three midfielders, but against Arsenal, he played a more advanced role. He played between Arsenal’s lines, where he could provide more service to Robin Van Persie while also posing a dangerous scoring threat himself.

Arsenal’s lack of bite
By selecting a 4-3-3, Arsene Wenger was hoping that he would be able to take advantage of a central midfield area which many consider to be Manchester United’s weakest area. He started Mikel Arteta as the deepest lying central midfield, with Jack Wilshire playing further ahead on the left side of the pitch, and Santi Cazorla playing ahead of Arteta on the right side. The intention of this was that Wilshire and Cazorla would try to get behind Tom Cleverley and Michael Carrick.

Unfortunately for Arsenal, this strategy didn’t work. Both Cleverley and Carrick did an excellent job shutting down Wilshire and Cazorla. In addition, Wayne Rooney did an excellent job getting goal side of Mikel Arteta, ensuring he didn’t have any time or space to operate with the ball. 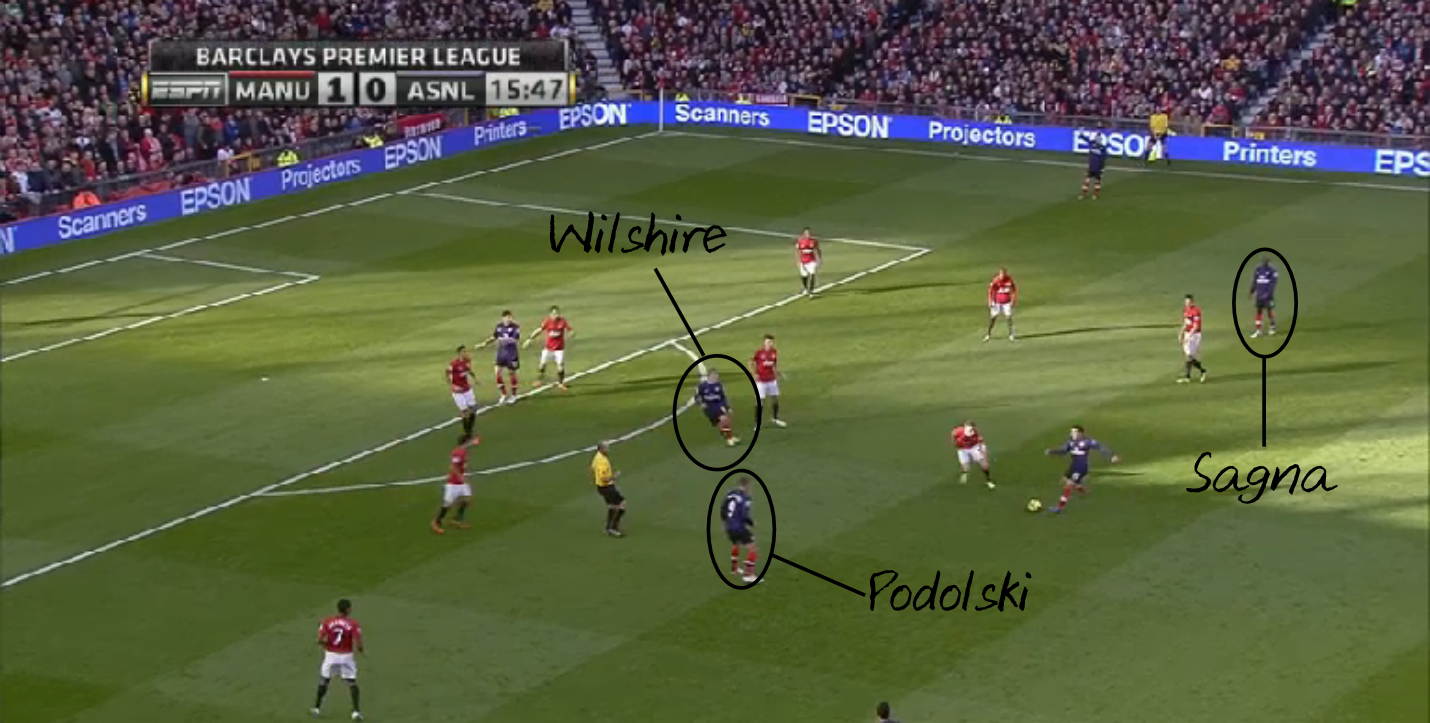 Arsenal lacked width, with the wingers and fullbacks coming inside.

While Manchester United’s defense played well, Arsenal helped by shooting themselves in the foot. The front line consisted of Olivier Giroud as the central striker, with Lukas Podolski supporting on the left wing and Aaron Ramsey supporting on the right wing. Unfortunately for Arsenal, neither of the wingers were able to provide any width to Arsenal’s attack. Both Ramsey and Podolski were looking to come inside. In addition, Podolski played very deep, which meant that Podolski and Ramsey were constantly running into space already taken up by Jack Wilshire and Santi Cazorla. This congestion made it easy for Manchester United to defend, and hard for Arsenal to get the ball forward. Additionally, Olivier Giroud struggled to provide any scoring threat. He was frequently forced to drift out to the touchline to get on the ball, and this removed any scoring threat from in front of the goal.

In addition to some good defending by Manchester United, they were also helped by Arsenal’s frequent misplaced passes, lack of movement off the ball, and complete inability to get the ball forward. This made it easier for Manchester United to attack, and they were able to claim a 1-0 lead within 180 seconds when Antonio Valencia played a low cross into the box. The ball came straight to Vermaelen, who made an awful mess of it, and Robin Van Persie was able to pounce on the loose ball and take a first touch shot through Vermaelen’s legs and just inside the far post.

The constant pressing and pressure by United’s defense almost lead to another goal in the 21st minute when Patrice Evra was able to win the ball off of Aaron Ramsey at the midfield line. Starting a quick counter attack, Evra slid the ball centrally to Wayne Rooney. Rooney then put in a perfectly weighted through ball into the penalty area for Robin Van Persie. Van Persie took another first touch shot, but fortunately for Arsenal, Mannone was able to paw the ball away.

After 25 minutes, the Red Devils stopped pressing so high up the pitch and dropped deeper. They allowed Arsenal to have the ball with their defensive line, while tightening up at the back to ensure Cazorla and Wilshire had less space to play into.

Antonio Valencia and Rafael had excellent games, as they had success all game going forward. Arsenal’s left back, Andre Santos, had a very poor game defending, but he doesn’t deserve all the blame. He received almost no help from Lukas Podolski ahead of him, as Podolski watched all game as Rafael was able to get behind him and left Santos facing a 2v1 overload. While Valencia had some attacking success in this game, he continued his recent trend of trying to bring the ball inside, instead of taking on his defender and beating him to the byline before playing a cross in.

As the second half wore on, Manchester United started having success attacking from the left side. An excellent chance came in the 66th minute, when Ashley Young was able to play a nice in-swinging diagonal cross for Robin Van Persie, who was able to get behind a slumbering Arsenal defense. Van Persie had plenty of time to get control of the ball and take his shot, which Mannone was just able to deflect around the far post.

After Robin Van Persie’s near goal, United took a short corner. Young gave it back to Rooney, who had plenty of space and swung in a cross that went just over Mertesacker before falling for Patrice Evra to head into the net.

2-0 lead
In less than 3 minutes after Manchester United went up by 2, Jack Wilshire picked up his second yellow card and now Arsenal was reduced to 10 men. With 20 minutes left to play, Manchester United presented some threats but they seemed perfectly content to let the game end 2-0. Arsenal had a hard time mustering up a threat with 11 men, so when they were reduced to 10 men, everybody assumed that they would just try to see out the game without conceding any more goals.

Unfortunately for David De Gea, he lost his clean sheet with the final touch of the ball, as Santi Cazorla was able to curl the ball in from the edge of the penalty area.

The ending score of 2-1 makes the game sound much closer than it was. Arsenal didn’t show up for this game. Manchester United looked far from their best, but they were able to completely control this game. It wasn’t until second half stoppage time that Arsenal was able to put a shot on frame. Robin Van Persie looked sharp, as did Michael Carrick. Wayne Rooney and Tom Cleverley both struggled a bit, but it overall it was a valuable three points. This result, combined with Chelsea’s draw against Swansea, means the Red Devils are now top of the table.