The Swan to Watch for United 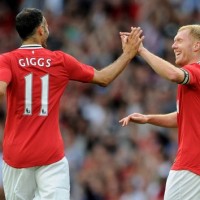 This weekend Manchester United travel the B-Roads through Wales to take on an inconsistent but sometimes brilliant Swansea City at The Liberty Stadium. United will be looking to increase their current winning streak (5), but a performance in the mould of what we witnessed at Carrow Road in mid-Novemeber, could see United turned over so they know they must avoid complacency.

The Swans have conceded at least once in 78% of all their home fixtures while 78% of both their fixtures finished with over 2.5 goals (home & away receptively). Does this guarantee us goals? I hope so because each time United score on their travels this season – they win. Only Everton and Norwich have stopped us finding the back of the net so far on our travels, both going on to win by a single goal.

Last week Betegy accurately predicted a 3-1 win to United. This week Betegy suggest there will be goals for both sides and there will be over 2.5 of them in a 1-2 away win to The Reds. They do however, somewhat quirkily, pin Swansea to their Extreme Bet (the weaker side has a good chance of taking points at decent odds), perhaps this highlights the uncertainty surrounding both teams’ ability to defend.

Having conceded as many goals (24) as Sunderland as far down the league as 16th, United are relying heavily on outscoring opponents this season – enter Robin van Persie (15), Chicharito (9) and Wayne Rooney (8). The squad have also chipped in with important goals but in my opinion players like Young, Valencia, Kagawa (when fit) and Danny Welbeck must begin to offer more in front of goal (when they get their chances) for United to challenge for their 20th league title. 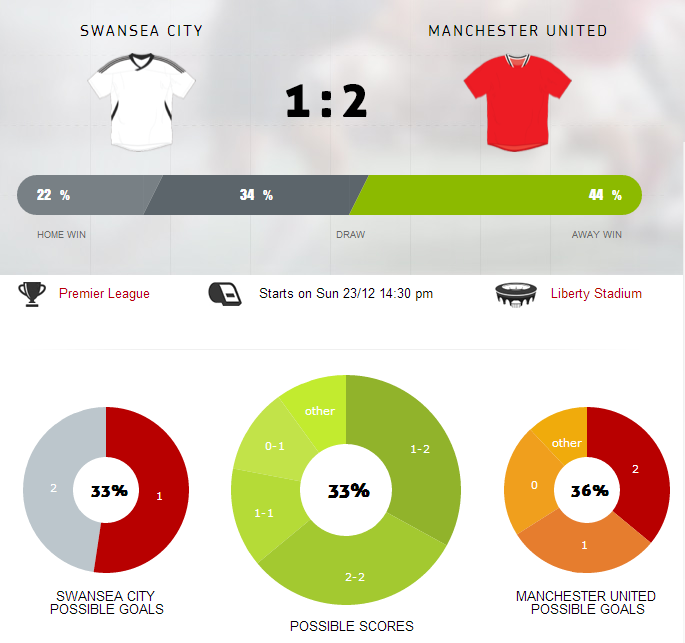 Last season Swansea gave United a tough time at The Liberty with Ryan Giggs clinching the game early on after capitalising on some indecisive defending. Do we expect to see Ryan Giggs again tomorrow? Many believe Giggs’ days are gone, they believe both he and Scholes are beyond repair, ready for the knackers yard, I reckon tomorrow gives them both the chance to prove the doubters wrong…..especially Scholes. 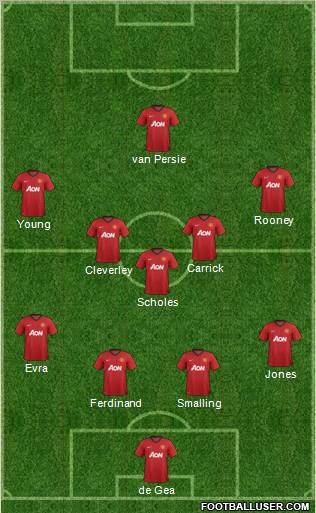 This is our only away fixture in the Christmas period and it’s a game we need to control. We need to retain the ball, we need to care for it and give as little possession away as possible to a Swansea team more than comfortable with letting the opposition chase the ball around the pitch. They don’t care who they’re playing either. They’ll show United no respect tomorrow and credit to them but it’s our job to deny them the opportunity.

Yes Paul Scholes has been guilty of below par performances recently but, with Carrick and Cleverley alongside him, I think it’s a game Sir Alex will ask Scholes to dictate deny the opposition time on the ball….but that relies on Scholes delivering and I think he will.

I wouldn’t be surprised to see Giggs on the bench but play a crucial part later in the game, maybe even replacing Scholes.

United’s biggest loss through injury this week is Rafael, but with the return of defenders Jones and Smalling it’s not as big a blow as it would’ve been a month or so ago. Vidic and Valencia are doubtful but either or both could find a spot on the bench. Kagawa returned to training this week and looks set to play some part soon.

Can you believe that even now – before the festive period – the Premier League looks like a two-horse race? With City kicking off 24hrs before, United will know whether 3 points at The Liberty will restore their 6 point lead or increase it. With a home fixture to table-proppers Reading I can’t see City slipping up so it could come down to how we handle the pressure.

I have a feeling all the so-called ‘big-boys’ will win this weekend with United grabbing themselves a 2-0 win. Yes that’s right….a cleansheet! Seriously, it’s got to happen sometime. Michu will need to be paid close attention, but if we can shut him down and choke his service, Swansea offer far less of a threat and should be confidently dealt with.

Betegy.com is a football predictions site you can register with for free. Their strike rate is good (as last week proves) and rapidly improving, well worth interest if you’re looking for tips on where to place your sensible money. Betegy has stats and predictions for all the major European leagues and currently boasts 100% accuracy with their ‘Recommended Bet’ in the Premier League.