The Scottish Player Returns | Bardsley Next in OT Clearout

Despite being out of the roundup routine, there is surprising little to talk about today.

Unless you are interested in international friendlies. In which case, Ronaldo (and Nani, albeit as a sub) was involved in a 2-0 win for Portugal over Azerbaijan. Ronaldo made his 50th appearance for his country. Patrice Evra earned a start for France in a 6-0 rout of Faroe Islands. Vidic, Fletcher, O’Shea, Saha, Van der Sar were all injured, so didn’t figure for their respective countries. Also, goalkeepers Artur Boruc (Celtic) and Lukas Fabianski (Arsenal) were preferred over Tomasz Kuszczak — which isn’t bad news for us, is it?

And other than that, there was the England game, which I didn’t get to see much of, but Wayne Rooney had a good game. He finally did score after a while which is good for him. A lot of United websites were quite angry at the treatment meted out to Rooney by the media while Gerrard continues to be a darling of everyone. A lot of that is true to be honest. In fact a lot of United players do face a lot of stick while playing for England. (Remember Beckham?) Scott has a good article, as always, on that. So I’ll save my breath on that issue.

In other news, Darren Fletcher is expected to make a surprise return for Scotland in their Wednesday qualifier against Georgia. It is surprising that they are actually rushing him back. They seem to be doing just fine even without him, so I wonder if Fergie has anything to say about that. Although, I guess he has nothing against making sure Scotland qualify for the Euro 2008. 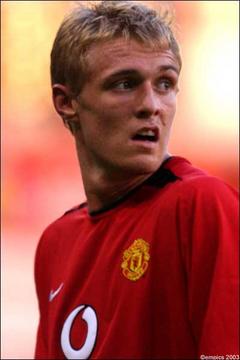 Meanwhile, John O’Shea has begun training with the Republic, giving hope to the Irish that he might play a part in their game against Cyprus. Ireland really have only a mathematical chance of qualifying and will need a little bit of luck if they want to make it to Austria.

And that should be all the space I’ve afforded towards international matches. Regulars would know, that I don’t care too much about them, although I do enjoy watching the big tournaments like the Euro and the World Cup. So this is quite large a space devoted towards internationals. Although, it is good to know that Fletch and O’Shea are making good progress. It’s not really possible to expect Anderson to start alongside Scholes against the likes of Villa, who have made great strides this season.

Moving on, it’s clear out time at OT as Sheffield United are the latest to benefit from members of our youth ranks, as they sign Bardsley on a loan. I am not sure about Bardsley and as far as I can think, a move to Bramall Lane is only a step back for the lad. He was at Aston Villa last season, and now Danny Simpson looks to be preferred over Bardo. I would have liked to see him given more chances but then, that was what the Carling Cup was for, wasn’t it?

Barsdley’s loan move follows that of Lee Martin to Plymouth, Adam Eckersley to Port Vale and Darron Gibson – who is expected to move to Wolves once he recovers from his injury. Interestingly, Adam Eckersley had a dream debut at Port Vale as he got sent off following two bookings!

While clear outs are in full swing, there are a few names linked with the club, as would be expected. Southend’s Medi Abalimba has won a chance to trial with the club. Make no mistake, this is just a trial, so the player may or may not cut it. After all, he’s just 16 years old. Rumours abound that SAF is keeping tabs on Carlos Tevez’s brother, Miguel. But, since I read this on the Daily Mail, I’ll reserve my comments till a more credible source runs a report.

Finally, a word on Patrice Evra, who is turning out to be the biggest Manchester United fan, at least among the playing XI — due respect to Giggs, Neville, Scholes and others — as he has begun gorging himself on the club’s history books and DVDs. He seems a very humble fellow, and almost every thing that he says gives more weight to my belief that Heinze was such a cunt. This is what he said:

“I joined a club that has such a strong identity so I had to learn it. I watched many cassettes, DVDs of Eric Cantona and have translated a lot of books. Now when an ex-player shakes hands with me, I know who he is. […]Learning about the plane crash in 1958 moved me. When I take the plane with Bobby Charlton, I ask myself, â€™how can he do it after what he has been through?â€™. I have more and more respect for this shirt. I advise everybody to be interested in his club, to identify yourself to it, it helped me.”

Very well said Pat. You seem to have grown into the club faster than many. It is motivation for many of us to revisit some of the old DVDs and bits of literature that we might have missed along the way. If Evra lasts the full distance for the club he will be as big as some of the other recent full back greats such as Gary Neville and Denis Irwin. And while on the subject of players who love the club, Tevez says he’s not called lion just because of his bravery. Apparently he gets up from bed and turns up at training straightaway. His dishevelled hair and appearance makes him look like a lion. No, really. That’s what the article says.

And that’s about it for the day. I never expected to write this much today. Honest. But when you begin ranting, you never know when to put a stop. More tomorrow.