The Karim of the Crop? 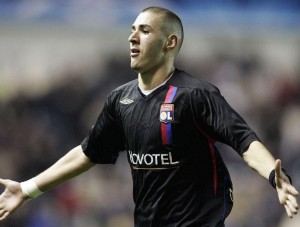 With Carlos Tevez’ future still hanging in the balance we’ve seen the names of  a couple of big-name strikers bandied about who are being mooted as potential replacements for the Argentine.

Over the next month or so I’ll be providing you with regular transfer rumour updates as the merry-go-round that is the summer window in European football gets into full swing.

So without further ado for my first report of the summer I present to you a player that certainly knows how to find the back of the net. If the title and picture wasn’t already a giveaway, it is ofcourse Lyon and France hit man Karim Benzema.

He’s been labelled one of the hottest prospects in European football for a couple of years now and it’s not too difficult to see why. This season alone the Frenchman has mustered up 17 goals in 36 league outings for Lyon and he’s also bagged five goals in eight Champions League appearances too.

Although it was in the Champions League last season where we all witnessed a firsthand account of exactly what Benzema is all about. Not only did he prove a handful for messers Ferdinand and Vidic at the Stade Gerland, Benzema also scored a stunning goal and you couldn’t help but admire his undoubted talents right there and then. So what’s Fergie waiting for?

Well the first stumbling block for me would be Lyon’s reluctance to sell their prized asset unless an extortionate amount of money is put on the table. With Juninho Pernambucano’s impending departure, why would Lyon even contemplate allowing their other star man to leave? Surely that would prove crippling not only to their prospects for next season but also to the faith of their supporters who have already had to endure a frustrating season as it is.

At 21-years-old Benzema has a whole career at the highest level ahead of him. With 23 caps to his name already, he is clearly no stranger to the international scene and my only fear would be his ability to adapt from a decidedly weaker French league. Although while young Karim does appear to have all the hunger and maturity needed to succeed in England, will Ferguson really be willing to stump up the £30 odd million required to get his man? Lose both Ronaldo and Tevez and he may not have the luxury of choice.

In all fairness I just think it’s going to be one season too early for Benzema to leave Ligue 1. With the likes of ourselves and Bareclona clearly at the front of the queue for his signature, the bigwigs at Lyon will know that with a World Cup only just around the corner, the potential is there to squeeze out a few million more if all goes well for France in South Africa. Saying that if Lyon fail to qualify for the Champions League proper they would be hard pressed to convince their main man that Stade Gerland is the place the be. Without the safety net of Europe’s premier club competition, rebuffing decent bids for his services would become an almost impossible task.

With all things considered, would Benzema really be content at potentially having to sit on the bench at various stages this season especially with it being a World Cup year? Ferguson will undoubtedly put faith in Berbatov for another season at least and with Rooney and Ronaldo available as potential striking options too, Benzema surely wouldn’t be a nailed on starter with every conceivable game.

There’s no arguing the fact that Benzema would be a terrific signing at Old Trafford as he would add pace, fluidity and a potency that was considerably lacking during the current campaign. But while I can’t see this move happening during the current transfer window, Fergie may not want to drag his feet for too long as Barcelona will be waiting to pounce as they search for an apt replacement for the ageing Thierry Henry. My biggest fear is that Benzema rather perfectly fits the bill.

Editor’s note: This is should be first in a series rounding up transfer rumours concerning United over the summer. If you however want to keep track of transfers of clubs over Europe you could head over to the transfer lists page here.