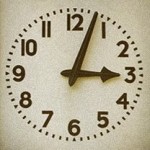 The 6th of February.is a sad day for United fans. Thousands of words have been written and spoken, therefore to avoid the risk of becoming tedious, we have decided to re-publish an article that appeared on Red Rants 12 months ago. If you didn’t read then, we hope it’ll be a fitting tribute to the Babes, if you had already read it hopefully you’ll still find it poignant.

For the vast majority of people, the first days in February don’t mean anything else apart from bitterly cold weather – or scorching hot, depending on which side of the Equator you wake up – and a disheartening feeling deriving from the realisation that summer holidays are still very far away.

For people that were born with Manchester United in their veins though, the 6th of February carries a special meaning.

This year marks the 54th anniversary of the tragedy that saw one of the greatest teams of all times almost completely wiped out by an air crash in Munich.

Since everything has been written and said about the event – more often than not by people much better suited to the job than I am – I decided to tackle it from a different angle. I was toying with different ideas when I recalled a conversation I had had with my girlfriend’s brother – an avid follower of English football who, despite being only 14 and despite having set foot in England only once, is on his way to become a football expert – which made me realise why Manchester United Football Club are so special.

Last year in February I visited my girlfriend in Europe, and I watched the Wolves-United game on TV with her brother. The game, I’m sure you’ll remember, brought United’s unbeaten record to an end.

“Has something happened? Why are they wearing them for?” he asked.

“It’s for the Busby Babes,” I replied, while pictures of fans in the United end holding a flag reading “MUFC – We’ll never die” appeared on the screen.

The look on his face told me that he wasn’t too sure of what I was talking about. “The Busby Babes?”

“They were called Busby Babes because the manager at the time was Matt Busby,” I explained, “he decided to field a team with very young players, hence the nickname.” 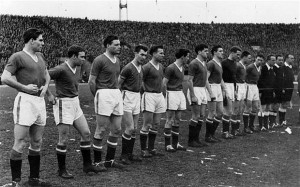 “They were so good that Busby, against the FA’s opinion, decided they would take part in the European Cup, when no other English team had done so,” I carried on explaining how, after swiping everybody aside in England, they seemed poised to repeat the feat in Europe.

Sir Matt’s philosophy had struck me when, as a kid, I had first heard of him: “Busby believed young players to be the future of Manchester United, and was ready to give young players a chance. He and Jimmy Murphy, his assistant manager, had set up a scouting system that was years ahead of other teams’ networks,” I explained.

Sam, a puzzled look on his face, asked the question I had been waiting for: “Surely though, they were too young to be that good?”

My reply, you have probably guessed it, was: “If they’re good enough, they’re old enough.” 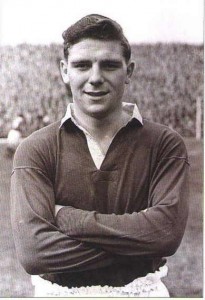 “And, trust me, they were good enough. 50-60 thousands people would fill Old Trafford to see them playing, the whole country was in awe of their breathtaking football, based on wave after wave of attack.”

The words ‘If ever they’re playing in your town, you must get yourself to that football ground; take a lesson come and see, football taught by Matt Busby’ would have described the concept beautifully. If the Busby Babes were around today, every man and his dog would be be heading to their local casumo casino or betting shop to back them for the title.

By then I wanted to tell him everything I knew about Sir Matt’s wonderful boys but, aware of the difficulty of keeping a teenager engaged into a conversation for longer than ten minutes, I backed off. He would have to make his choice.

“Charlton, did you say?” Sam asked, looking as if he was pondering whether the Charlton he knew of was, in fact, the same I had previously mentioned, “but I thought he became a legend for winning the European Cup in 1968,” he argued.

That was the chance I had been waiting for, as I jumped into the story.

“You’re right, Sir Bobby won the European Cup in 1968 against Benfica, but he had joined United in 1956 and was one of the youngsters in the team,” I said.

“That team had superb players, such as Dennis Viollet and Tommy Taylor – a pair of centre-forwards that would make today’s strikers look paltry in comparison – and Billy Whelan, a flash-footed winger who could have become a star decades before Giggs or like Bill Foulkes who would go on and captain United to their first European Cup.” 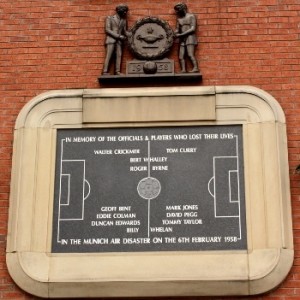 “So, who was the captain then?” he enquired, with more than mere curiosity.

“The captain,” I explained, “was Roger Byrne. He wasn’t what you would call the most gifted of footballers but he was able to read the game brilliantly and had an immense work ethic.”

I had never thought of such a comparison myself, but after Sam had pointed it out, I realized that Red Nev and Byrne had many things in common.

At this point I felt totally immersed in the story, just as I had done when I had first heard it. The look on Sam’s face told me that I had grabbed his attention completely too. Not even the temptation of free spins by 777spinslot.com would have torn him away from my story.

“But the greatest of them all, was Duncan Edwards: a colossus of a footballer, so young but with the body of a man. He had made his debut aged only 16, making him the youngest ever player to play in the first division at the time. He won two consecutive FA Youth Cups, before winning two consecutive league titles.”

“Did you know,” I went on, “that until Michael Owen made his debut for England, Big Dunc was the youngest ever player to play for the national team? And that, according to Bobby Charlton, he could have become the greatest player ever?”

Sam had gone silent by then, his eyes quickly looking at one of the videos of the Busby Babes I had shown him earlier.

“Ok, but I still don’t get why the players wore armbands today.”

In telling him about the players I had, unconsciously, failed to answer the original question, which required an explanation. 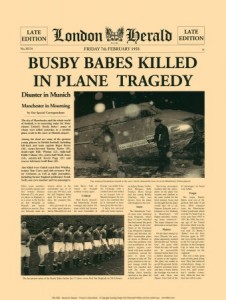 “In February 1958, United played Red Star Belgrade in the second leg of the quarter finals of the European Cup, drawing 3-3,” I began.

“To avoid the FA’s wrath, United had to fly back the following day but, since a non-stop trip from Belgrade to Manchester was out of the aircraft’s range, they had to stop over in Munich for refueling,” I continued.

“Because of the atrocious weather conditions, the runaway had been covered in snow and slush, making it almost impossible for the plane to take off. After two aborted attempts, the passengers returned to the terminal waiting for the weather conditions to improve.”

“Some of the players were so sure they would spend the night in Munich that they even sent cables to their wives and girlfriends in Manchester, explaining the situation. The captain though, was worried that an overnight stay would see them fall too far behind schedule and attempted a third take off.”

“The plane crashed at the end of the runaway, the impact killing 20 passengers among whom Tommy Taylor, Roger Byrne, Geoff Bent, Billy Whelan and Mark Jones. Three club’s officials were also killed as well as eight journalists, a fan, and two members of the crew.”

Sam couldn’t have been more focused if he had been watching a movie, so I moved on: “Harry Gregg, United’s keeper, had been thrown out the cabin after the impact along with Bobby Charlton.”

“He had thought Charlton was dead, and went back to the wreckage to rescue survivors to safety, despite the danger of an explosion.” 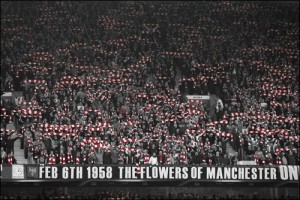 Sam stared at me, disbelief apparent on his face: “Are you telling me that he went into a burning airplane to carry out the survivors?”

He had been struck by the legend of the “Hero of Munich”.

My narrative in full flow, I decided to mention every detail I could think of, including that Duncan Edwards was carried to the hospital, were he fought for a fortnight against death, before succumbing.

“At one stage he had asked Jimmy Murphy at what time the game against Wolves was supposed to kick off. The lad was made of steel,” I recalled, much to Sam’s disbelief.

“Busby himself was fighting for life and, when Jimmy Murphy got to the hospital, Sir Matt told him to ‘keep the flag flying’ and to take care of the rest of the team.”

I could see that Sam had been shocked by the story, and by the fact that United had to borrow players from other teams to field 11 players against Sheffield Wednesday in the 5th round of the FA Cup, in what was surely the most emotional match Old Trafford has ever witnessed.

“I guess they won the game.” It was a statement more than a question.

And he was, obviously, correct, as United won 3-0, going all the way to the final, which they lost to Bolton. Probably the first – and only time – that the whole country wanted Manchester United to win a final.

Sam looked like he had just discovered something that had been in front of his eyes for years, yet he had ignored. “That’s why, when I went to Manchester – to see Ronaldo and Rooney destroy Portsmouth in 2008 – I saw a clock outside the ground reading Munich 6th February 1958.”

“Exactly, the clock is long-lasting tribute to the victims, at the entrance of what is now called ‘Munich tunnel’,” I explained.

His attention switched back to the crash: “Busby and Charlton obviously survived the crash.”

“Yes, they did,” I replied, “Charlton considered the idea of quitting football altogether and Busby felt responsible for the death of his boys, as it had been his idea to take part in the European Cup. Only 10 years later, when Benfica were thumped 4-1 at Wembley, he allowed himself to put those demons to rest.”

I could see that he was lost for words, so I reminded him of how, on the 50th anniversary of the tragedy, United played with old-fashioned shirts, the number going from 1 to 11, to commemorate the Busby Babes.

“2008 was a great year, you won the European Cup,” he said with a grin, before adding “I bet United fans and players knew they had to mark the 50th anniversary properly.”

I barely heard those words, as I was watching a video I had seen time and again, entitled “The Flowers of Manchester” and I could feel my eyes were filled with tears.

Noticing that, Sam looked at me for a while, then he said: “You can be so proud of your club.”

In Munich you died, in our hearts you’ll live forever.

Rest in peace lads, the flag is still flying. MUFC 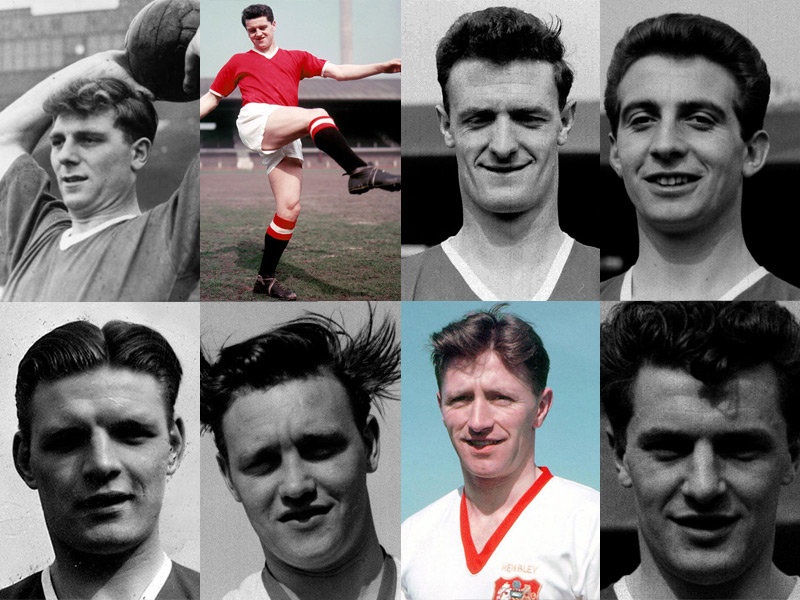