The Evolution Of Nani 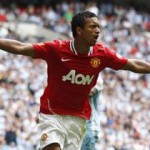 Nani has received a lot of (deserved) praise in last 18 months for stepping up his game and maturing as a player. United’s player of the year last season, the creator of THAT goal against Arsenal, the Playstation-esque chip against Tottenham, and a fistful of crucial goals that have sometimes been forgotten (like his goal against City last season right before Rooney scored his ‘goal’).

ManUtd.com carries an excellent interview with Nani, where he talks about the transformations in the squad over the summer, his left foot and the constant comparisons with Ronaldo.

The one thing Nani is coy about in the interview, or perhaps something that wasn’t asked to him directly, was his future at United. His agent has made noises in the transfer window for the last two years and that’s why the added responsibilities placed on Nani are so important – they will help make him a more integral part of the team and hopefully help his growth. He’s said he wants to be the best player in the world, but that trophies are more important. He’s likely to get the latter at United, although he has a long way to go in terms of his decision-making and impact on the game.

It’s also unfair to compare Nani to Ronaldo for many reasons, but in terms of their growth at the club they are fairly similar – Nani and Ronaldo both came into the United team at different times and vastly differing situations. Ronaldo was brought to United in 2003, the start of our three year run where we didn’t win the league title. It was his fourth season at the club, 2006/2007, that he started maturing as a player.

Nani arrived in 2008, after the first title had been won and United were splurging on youth to protect their future. With increased pressure to win, Anderson and Nani got limited chances. Where the likes of Darren Fletcher and Ronaldo (and Rooney, who arrived in 2004) had been given time to bed in, the stakes were higher for the duo. As such, to have Nani and Anderson maturing in their third and fourth seasons simply means that, like Ronaldo and Rooney, they needed time to develop and like the star duo before them, they benefited from senior players leaving and having more responsibility and playing time after a few years of hard work.

Looking Ahead To Stoke

Traveling to the Britannia to watch the game? You can get your Stoke v Manchester United tickets from TicketBis.

United’s next game (after a wholly-satisfying 3-0 win at Elland Road which ended with Berbatov playing at center back) is away to Stoke, who are undefeated at home this season, holding Chelsea to a draw in their season opener, beating Liverpool 1-0 and beating Tottenham on penalties in the Carling Cup yesterday. Their positive start to the season – 8 points after 5 games and a heady 5th place in the Premier League table – is underlined by a strong mental attitude and worth ethic instilled by Tony Pulis and that has kept them going despite being very poor in front of goal.

With Hernandez deemed unavailable, Fergie will pair one of Owen, Berbatov and Welbeck (who played last night as well) with Rooney up front and United are unlikely to be as profligate or forgiving as other visiting teams to the Brittannia. You can expect the press to keep pressing the De Gea angle w.r.t. Stoke’s physical game, but having seen Stoke play earlier this season they’re not going to get anywhere relying just on set pieces. How they cope with United’s pace will be a much greater concern during the game and United, thankfully, do not have an OAP playing at right-back this time around.

United have a stretch of 3 relatively comfortable games before the next international break – Basle and Norwich at home after the Stoke game – before the fun starts again with Liverpool, Galati, City and Everton back to back opponents. It’s a chance for United to put the points on the table and also give their squad players games to ensure they are in good form when called upon later in the season. Fergie will resort to the tried and tested for Stoke but it’ll be interesting to see who he picks for the next two games.

Most of all, it’ll be interesting to see when Berbatov next starts a Premier League game for United. And whether Michael Owen gets there first…

Could Lindegaard Start The Season As United’s #1?
Ravel: Unravelled