More reports are pouring in. They are all over the place. And now, it’s the BBC’s turn..

BBC’s Radio Five Live Sport thinks a deal could be done by the weekend. Nice. Really, nice. For those living under a rock (or sleeping, or plain stoned), for the past few hours, please read this.

I know, these reports can be overwhelming, at times, due to the suddenness (that have generally characterized United’s moves this summer). I’d therefore advise you all to take some deep breaths and get some medical insurance in the event of this deal falling through. Yes, that is very much possible, gentle readers.

The Telegraph’s headline also seems pretty confident, although it looks more like a copy paste of earlier reports.

About the deal though, here’s my take. Most reports contend that United will cross 70 million pounds of spending, this season, if they buy Tevez. I say, our spending will not have even exceeded 40 million. If you consider just this season.

Ever since the Glazers arrived, they have made more structured deals. Deals that involve paying up over a period of say, two or three seasons. Even the Nani and Anderson deals are potentially worth 30 million. Not a down payment kind of a deal. These amounts are subject to performance, and if their performances help us win titles, then I think 30 million is money well spent. 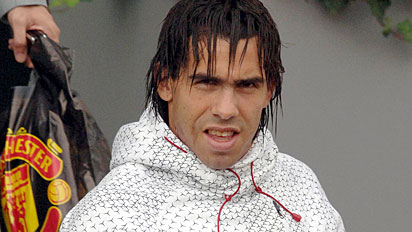 Tevez from his time with the Corinthians

Plus, contrary to what rivals fans may think, our spending still has plenty of prudence behind them. Love them or hate them, the Glazers are known to milk every penny as they come. So when they do spend, it is out of proper deliberation. So Tevez’s deal, while being touted for 20 million, would most likely be a loan deal with a down payment of 5 million to keep Kia happy, with a clause of having first option for a pre-specified fee. So our spending would be 20 million for Hargreaves, 15 million (approx.) for Nani+Anderson and 5 million for Tevez. That should make it 40 million. Of course, I haven’t factored the imminent sales these purchases would entail. Sales of Richardson, Smith and possibly Silvestre might add up to around 12 million for the most conservative minded. That would bring our net spending to around 28 million. Remember, we sold more than we bought last season, and spent only 6 million, the season before last.

If the Tevez deal does happen, trust United to make sure things stay clean, as far as the ownership of the player is concerned.

Anyhow, until it comes from the horse’s mouth, we will continue with the bated-breaths and crossed-fingers routine.