Tactical Analysis: What Ralf Rangnick’s Manchester United could look like 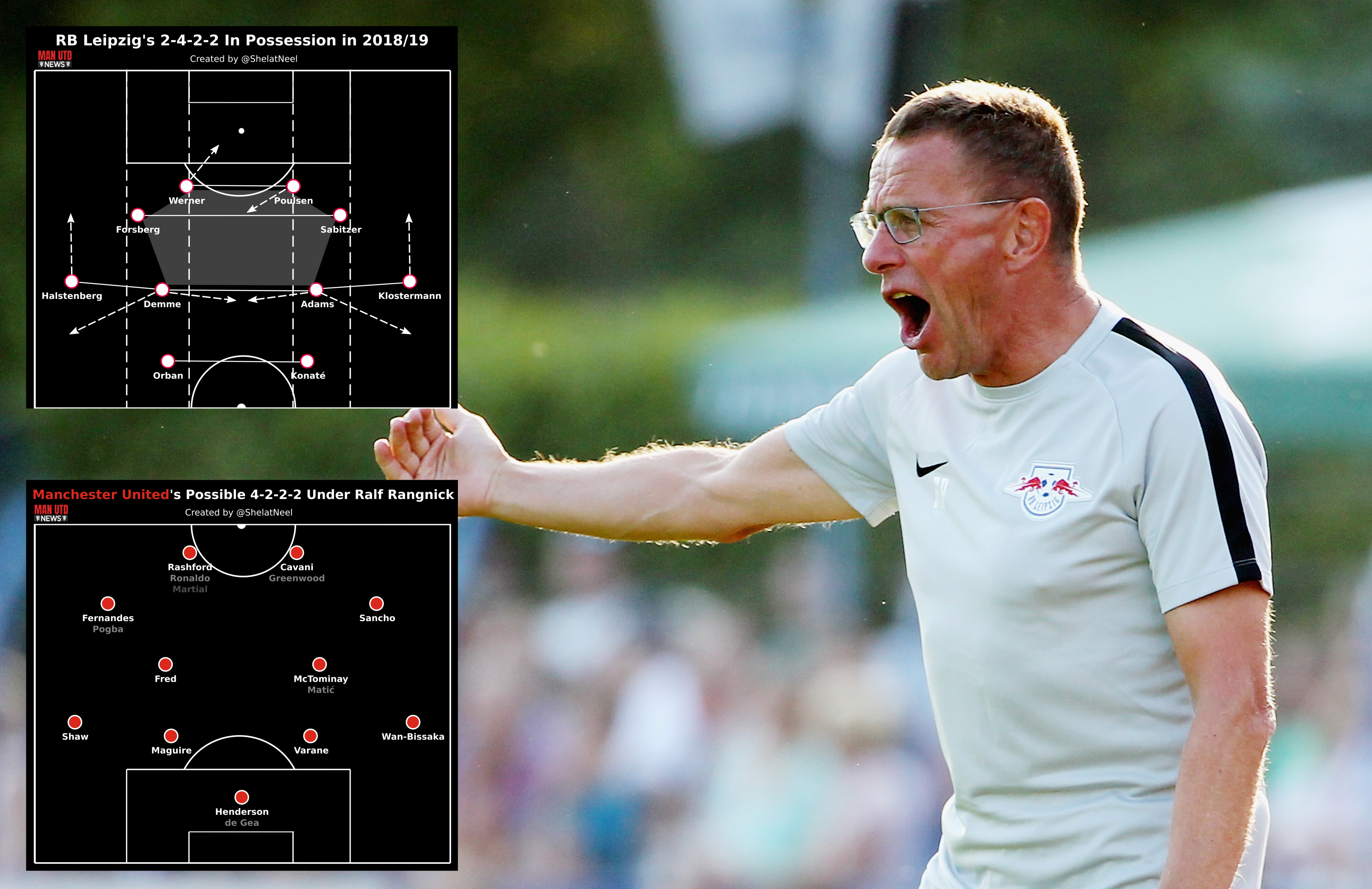 After years of settling with mediocre, Manchester United have finally appointed a truly world-class manager with Ralf Rangnick set to take charge until the end of the season after Ole Gunnar Solksjær’s departure.

The 63-year-old manager is one of the most well-respected names in world football, having played a massive role in revolutionising the Bundesliga and all of German club football with his intense and direct style of play.

This influenced almost every manager in the country, including Jürgen Klopp and Thomas Tuchel.

After a fairly ordinary playing career, Rangnick worked his way up the footballing ladder by starting in the lowest tiers as player-manager at Viktoria Backnung and later Ulm, with whom he won back-to-back promotions to go from the Regionalliga Süd right up to the Bundesliga.

His methods were perhaps too radical at Stuttgart and Schalke, whose executives were not so keen on a complete structural overhaul, so his next significant achievement was effectively building Hoffenheim from the ground up and once again delivering back-to-back promotions to cement a place in the Bundesliga.

A brief spell at Schalke followed his resignation from Hoffenheim after they sold star midfielder Luiz Gustavo to Bayern Munich without his approval, but he was diagnosed with Chronic Fatigue Syndrome and decided to take a step away from football for a while.

Rangnick was back in less than a year, though, this time overseeing operations at Red Bull’s football project with executive roles at both RB Leipzig and Red Bull Salzburg, and later New York Red Bulls and Red Bull Bragantino.

Salzburg were enjoying good times in the Austrian Bundesliga, but Leipzig were starting right at the bottom.

He did step into a coaching role for a brief period at Leipzig to ensure they secured promotion from the 2. Bundesliga in the 2015/16 season and had to do so again for the entirety of the 2018/19 season as Julian Nagelsmann stayed put at Hoffenheim for one more year.

He left in 2020, with a move to AC Milan seemingly in the offing, but Stefano Pioli’s strong results changed the club’s mind.

Rangnick then joined Lokomotiv Moscow before the start of the 2021/22 season as Head of Sports and Development, but that project has ended before it could take off.

One thing that is clear from his career so far is that Rangnick does not enjoy politics whatsoever and prefers to have complete control over proceedings with no external influences on his decision-making.

He does tend to perform very well under those circumstances, so his two-year contract in an advisory role at United after the end of the current season could very much go two ways.

For now, the focus must firmly be on what Rangnick can do as a manager in the short term, so let us quickly explore how his United side might look.

Given that the German tactician has not been in a managerial role at a title-challenging club in a top division, the most similar tenure we can focus on is his 2018/19 season with Leipzig, where he guided them to a third-place finish in the Bundesliga.

The first thing we can notice while looking back at the tactics he used in the season is that he is very flexible, having deployed 11 different formations.

Of course, the thing with formations is that they can be very trivial — the difference between a 3-1-4-2, 3-5-2 and 5-3-2 is very minimal, so the main takeaway should be that he used a back-four 25 times and a back-five on the remaining nine occasions in the Bundesliga.

This was his most-used XI:

In possession, this looked more like a very narrow 2-4-2-2. The defensive midfielders either drifted out wide to free up the full-backs to push forward or moved centrally, while the attacking midfielders operated as the chief creators in the half-spaces.

Yussuf Poulsen and Timo Werner formed a great connection up front where their countermovements caused massive problems for opposition defences, getting 31 goals between them.

The key to this set-up was the narrowness in midfield which offered great possibilities to counterpress.

This was backed up by Leipzig’s style of play in possession, which often involved hitting long balls through the middle to target either of the front-two either in behind (typically for Werner) or into feet (typically for Poulsen).

Even if these passes did not come off (and they often didn’t as Leipzig averaged just 49.5% possession and the third-worst pass completion rate in the league), any interceptions made by the opposition would draw an intense counterpress through the four attackers and two defensive midfielders.

After that, Rangnick believes that the best time to score after winning the ball back is within 10 seconds, as the opposition defence needs that amount of time to regain its shape.

Naturally, his sides love to counter-attack whenever possible.

This sort of intensity was matched out of possession as well, where Die Roten Bullen employed a very high defensive line and pressed deep into the final third.

Their objectives were similar – force the opposition inside by using the attacking midfielders who made curved runs, and then spring pressing traps by swarming the ball carrier from all sides using the strikers and defensive midfielders.

This system worked very well, as Leipzig had the best pressure success rate at 32.3% and the best defensive record in the 2018/19 Bundesliga with just 29 goals conceded in 34 matches.

The other formations used also followed similar principles of narrowness and verticality with two up top, whether through a back-three with a 3-1-4-2 and its variants or through other back-four systems like a 4-1-2-1-2 or even a 4-3-3, which added an extra man in midfield and was used more often in bigger games.

Before we try to translate a couple of those formations to the current United squad, we must first explore what Rangnick could do in terms of goalkeeper selection.

His 2018/19 Leipzig side made the second-most goalkeeper defensive actions outside the penalty area with 1.24 per 90 due to their high defensive line, but David de Gea is currently only making 0.23 per 90, which places him third from bottom among Premier League goalkeepers in 2021/22.

Dean Henderson averaged a much higher 1.12 defensive actions outside the penalty area per 90 in over 12 matches last season, so he could be more compatible with Rangnick’s style of play.

Given the wealth of attacking options United have, the 4-2-2-2 or one of its variants seems the best fit:

The big question surrounds Cristiano Ronaldo, and we might have an answer for that.

In 2016, Rangnick said that he would not consider signing Ronaldo or Lionel Messi at RB Leipzig even if the opportunity presented itself as they were ‘too old and expensive’.

Therefore, it is entirely possible that the more harder-working Cavani is selected ahead of him, while Marcus Rashford’s off-ball movements make him a good fit for the second striker role.

The lack of a traditional target man (like Poulsen at Leipzig) might be an issue that United could address in the summer transfer window, although Rangnick’s short tenure could impede the budget provided to him.

If the German manager wants more defensive stability, especially in bigger games, he could switch to a back-three system with a three-man midfield which could look something like this:

Regardless of what formations or personnel Rangnick chooses, one thing is sure – United are going to play some of the most tactically intricate football their fans have seen for quite a long time.

Stats courtesy Opta via WhoScored and StatsBomb via Fbref.