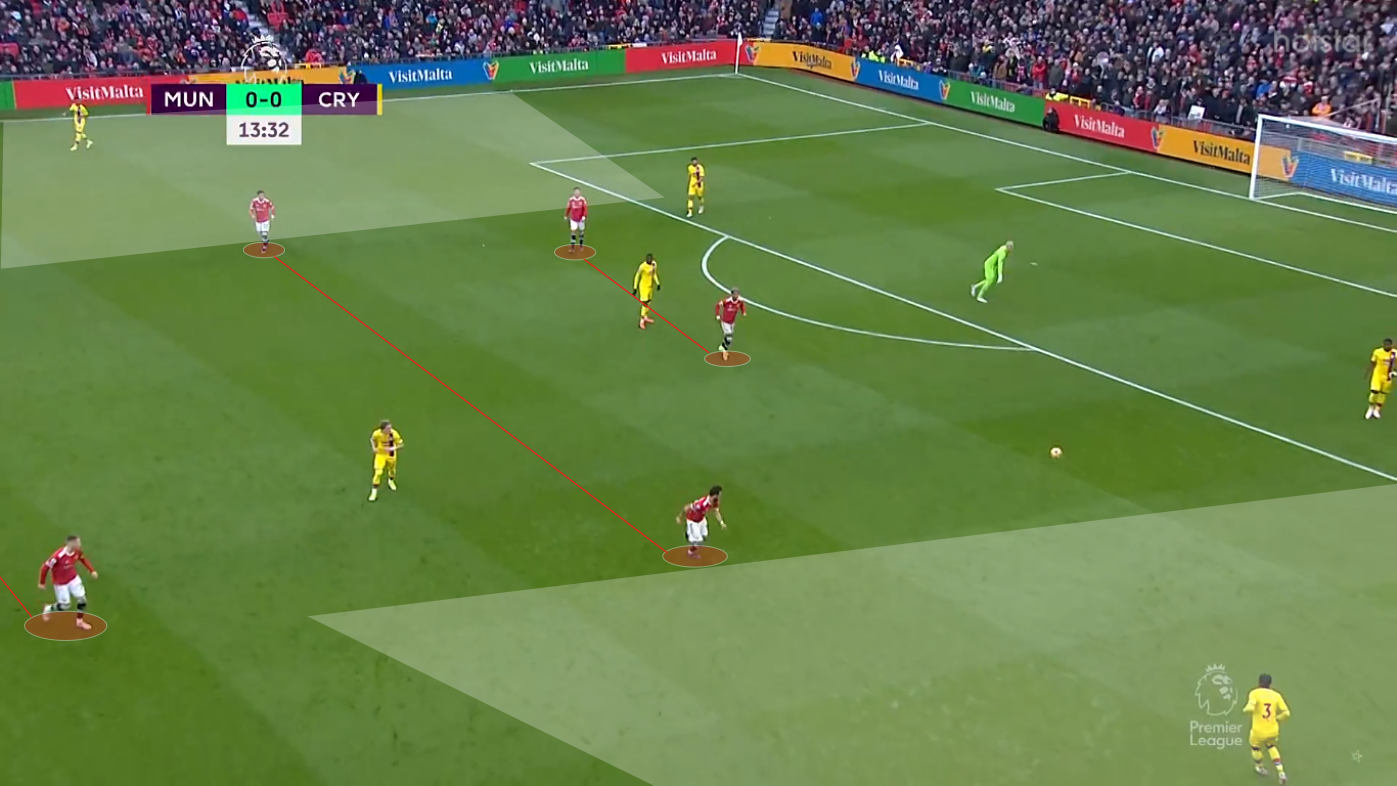 A new era at Manchester United began exactly 30 days ago, as Ralf Rangnick took charge of his first match as manager of the club.

The 63-year-old German will be in charge on an interim basis until the end of the season, but he has set about changing the playing style at Old Trafford, so it is worth examining what exactly he is trying to do.

The most apparent change has been the introduction of his favoured 4-2-2-2 formation, which has been used in all of his league matches so far.

The biggest improvement we have seen so far is United’s pressing, as Rangnick devised a clear system to make life difficult for opponents in their own half from the very first match.

In a high-block, the Red Devils maintain a very narrow 4-2-2-2 shape, with the objective being to force the opposition to play out wide.

Against a back-four, a pass to a full-back is the trigger for the press, which involves curved runs to force the ball back to the keeper and eventually the full-back on the other side…

…who would be cornered. Finally, to win the ball back, a central midfielder or full-back would get forward as well.

This is reflected in United’s defensive actions heatmap under their new manager.

Things change against a back-five, as was evident in the match against Wolverhampton Wanderers.

Due to the direct numerical inferiority in this case, United elect not to press and sit in a defensive block.

Deeper in their own half, the shape changes to a 4-4-2 with the wide attacking midfielder dropping back.

Counterpressing is one of Rangnick’s most well-advertised principles, so he has obviously been trying to improve United in that aspect. The 4-2-2-2 shape is very conducive for this…

…but on the whole, they have not done a particularly laudable job here.

While the number of counter-attacks conceded has gone down from an average of 3.79 per 90 in the Premier League to 1.8, the percentage of shots conceded from such situations has stayed similar by going from 49.05% to 50%.

United have looked quite exposed in transition too.

Quite clearly, the issue arises when the central midfielders commit to counterpressing but fail to win the ball back, opening up such huge spaces between themselves and the defence.

This has not directly led to a goal yet, but Rangnick certainly will not want to keep watching his centre-backs get exposed in transition.

Moving on to what is done in possession, United’s shape changes slightly to a 2-4-2-2, with the full-backs pushing up and the wide attacking midfielders moving into the half-spaces while the strikers try to stretch the opposition defence vertically.

When playing out from the back, the overall formation does not change apart from the goalkeeper splitting the centre-backs.

David de Gea has spent every league minute between the sticks so far, but he is not comfortable in possession.

Luckily, the Red Devils are yet to face strong high-pressing opposition under Rangnick, so this has not been a problem so far.

Against Burnley and Wolves, when Nemanja Matic partnered Scott McTominay in midfield, their system in the attacking half changed slightly to allow the Scotsman to have greater attacking freedom while Matic dropped closer to the centre-backs, thereby segregating two separate roles in central midfield.

In the second half of the Wolves match, we saw an interesting (albeit unsuccessful) switch to a back-three in possession, although that might have been an opposition-oriented decision.

As far as ball progression from the defensive third is concerned, United have primarily used quick, safe passing, especially in the wider areas of the pitch. This is highlighted in their receptions heatmap.

Their progressive passing has also seen an uptick from 33.6 per 90 previously to 42.4 now.

Rangnick’s main principle in terms of chance creation is to capitalise on disorganised defences both after successful counter-presses and from counter-attacks, which is why his sides’ key passes typically originate from beyond the 18-yard line and often go in behind the defence. This pattern has also been noticeable at United.

Although they are doing reasonably well in terms of xG with six goals from 7.7 in the league so far, their scoring methods have not been overly sustainable.

A lot of this xG has been generated from big chances coming from penalties or rebounds (which count for half of their league goals), meaning that the rest of their chances have not been very presentable.

Their shotmap is very all over the place, but this is expected from an attack full of trigger-happy shooters like Cristiano Ronaldo, Mason Greenwood, Bruno Fernandes and Marcus Rashford.

Curiously, United’s only two pass-assisted goals have come from the central midfielders — Fred and McTominay — who have both enjoyed the greater attacking freedom of their roles and are starting to deliver positive performances.

One solution to the chance quality problem might be to give more game time to Edinson Cavani up front.

The Uruguayan striker not only has the highest npxG/shot in the squad this season among players who have taken multiple shots at a very high 0.22, but he is also capable of opening up opportunities for others with his clever off-ball runs.

The German manager also likes counterattacking, but this is an area where his side have been surprisingly flat.

Previously this season, they averaged 4.14 counter-attacks per game, but now, this number has dropped to 1.8 under their new manager.

One of the reasons for this is, of course, the fact that their pressing has improved, which means they do not have to defend deep in their own half as much.

Equally, the likes of Ronaldo and Rashford have not made the sort of runs in behind that really threaten the opposition in transition, and the supply has not been great either.

Their defending, and pressing in particular, has dramatically improved (although they have had more than their fair share of luck with just three goals conceded from a tally of 4.6 xGA in the league), while some patterns of play are visible in possession too.

Chance creation is the biggest area of concern at the moment, and things will need to change quickly there too.

Rangnick’s Red Devils have enjoyed a decent start with 10 points from a possible 15 domestically, but a favourable run of fixtures has undoubtedly helped.

There is still lots of work to be done as they will face significantly tougher opponents in the tight race for the Champions League spots.

Stats courtesy StatsBomb via Fbref, Opta via Vizz App and Understat, and Wyscout.