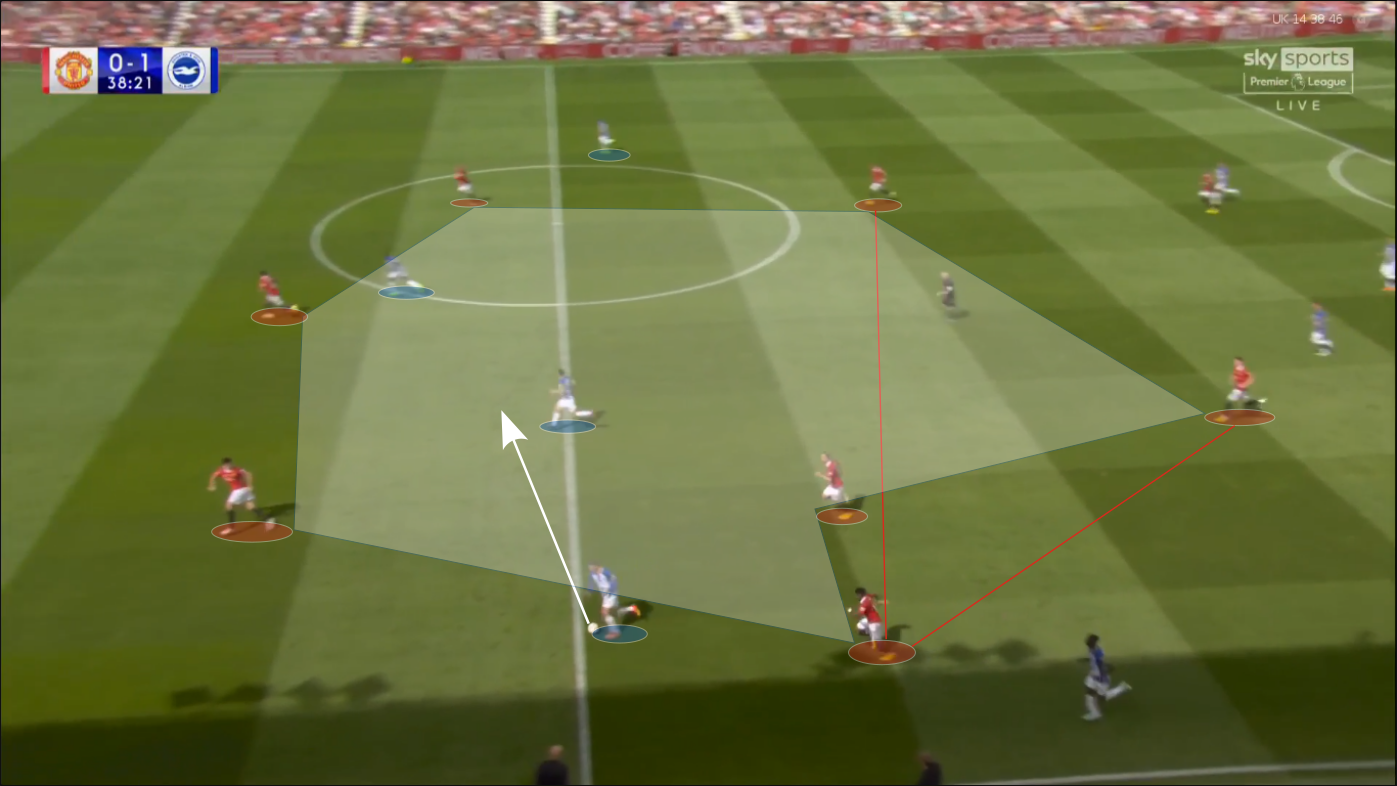 It was the start of a new era at Old Trafford on Sunday evening, as Erik ten Hag took charge of his first competitive match as the manager of Manchester United.

For the first time in years, there was near-unanimous excitement regarding a managerial appointment from fans and experts alike, and an impressive pre-season campaign only heightened that.

There were two new signings in the Red Devils’ line-up — Lisandro Martínez and Christian Eriksen who made their debuts.

The latter was interestingly used up front as United went without a recognised striker because Anthony Martial was out injured and Cristiano Ronaldo was deemed unfit to start after missing most of pre-season.

Brighton would prove to be a very good litmus test for Ten Hag, as Graham Potter is known for his tactical flexibility that can pose challenges to any and every side.

He threw quite a curveball in this match, picking his side in a 3-5-1-1 formation and adopting a low-possession strategy that is atypical of his team’s general style of play.

United were allowed to keep 63% of possession, but they did not always use it well. Their passing network from the match highlights some of their issues, such as their lack of an outlet in possession due to their striker-less approach, their left-sided bias and lack of proper spacing between their attackers.

The aggressive positioning of the wing-backs had two objectives – firstly to prevent the opposition full-backs from receiving in space as they stayed relatively deep in the build-up, but more importantly, by staying narrow, the wing-backs created a pentagon with the front two and Pascal Groß.

The front two mainly worked to close down the United centre-backs and the passing lanes open to them, except for the one in midfield to Fred.

The Brazilian midfielder was the lone deep-lying midfielder in possession as Scott McTominay was asked to push forward (as he can be seen doing in the above instance), so he was allowed to receive the ball at the heart of this aforementioned pentagon, after which Brighton would press him from all sides.

Fred is not the most press-resistant midfielder out there, so he unsurprisingly had a poor game and was brought off in the 53rd minute.

Another advantage of Brighton’s man-oriented defensive approach was that they would naturally be able to pose a threat in transition after turnovers. On the flipside, United’s one-man midfield in the build-up made them especially vulnerable in such situations. This is exactly how the first goal was created.

McTominay lost the ball in the middle of the park, and once he was bypassed, the visitors had a six-on-five going forward.

The move developed down the left, where Solly March played a through ball in behind to Danny Welbeck, who beat Harry Maguire’s attempted offside trap.

This left the United defence disorganised as Martínez was forced to come across from the left to cover, while Maguire failed to track the run of Groß, who converted a relatively simple tap-in.

United’s midfield continued to provide troublesome for the second goal, which saw Brighton transition quickly from having the ball close to their corner flag to advancing down the wing.

The home side’s midfield trio was absolutely all over the place, so Brighton were able to access an absolute acre of space in the middle of the park. Unprotected, United’s back line was manipulated from left…

…to right, with Maguire and Martínez again appearing to not be on the same wavelength.

The former’s decision to engage with the ball carrier forced the ex-Ajax defender to come across and cover, allowing Trossard to get his shot away. That was parried out by David de Gea, but the follow-up was converted by Groß again.

The reason Brighton were able to adopt such an aggressive man-oriented defensive approach that left just three men in the backline was United’s lack of a recognised striker, which meant that they had no direct threat against the numerically weak defensive line.

That changed after Ronaldo game on, and combined with the context of game state, the momentum of the game swung drastically and Brighton were forced to adopt a more measured defensive approach.

Even though they had to hold on for the three points in the end, Brighton certainly deserved the win on the whole as they looked the better team overall and created better goal-scoring chances.

Ultimately, for all the pre-season optimism, the same problems are plaguing United. It should not be much of a surprise, though, because while the manager has changed, the personnel in the problematic area (the midfield of course) have largely remained the same. Until United sign a quality defensive midfielder, only a miracle can fix their issues.

Either way, their performances should get better in the next few weeks as a recognised striker is brought into the fold and the new signings are properly integrated, but this is a very disappointing start to a season where United will most likely be a fair way off the top of the table again.