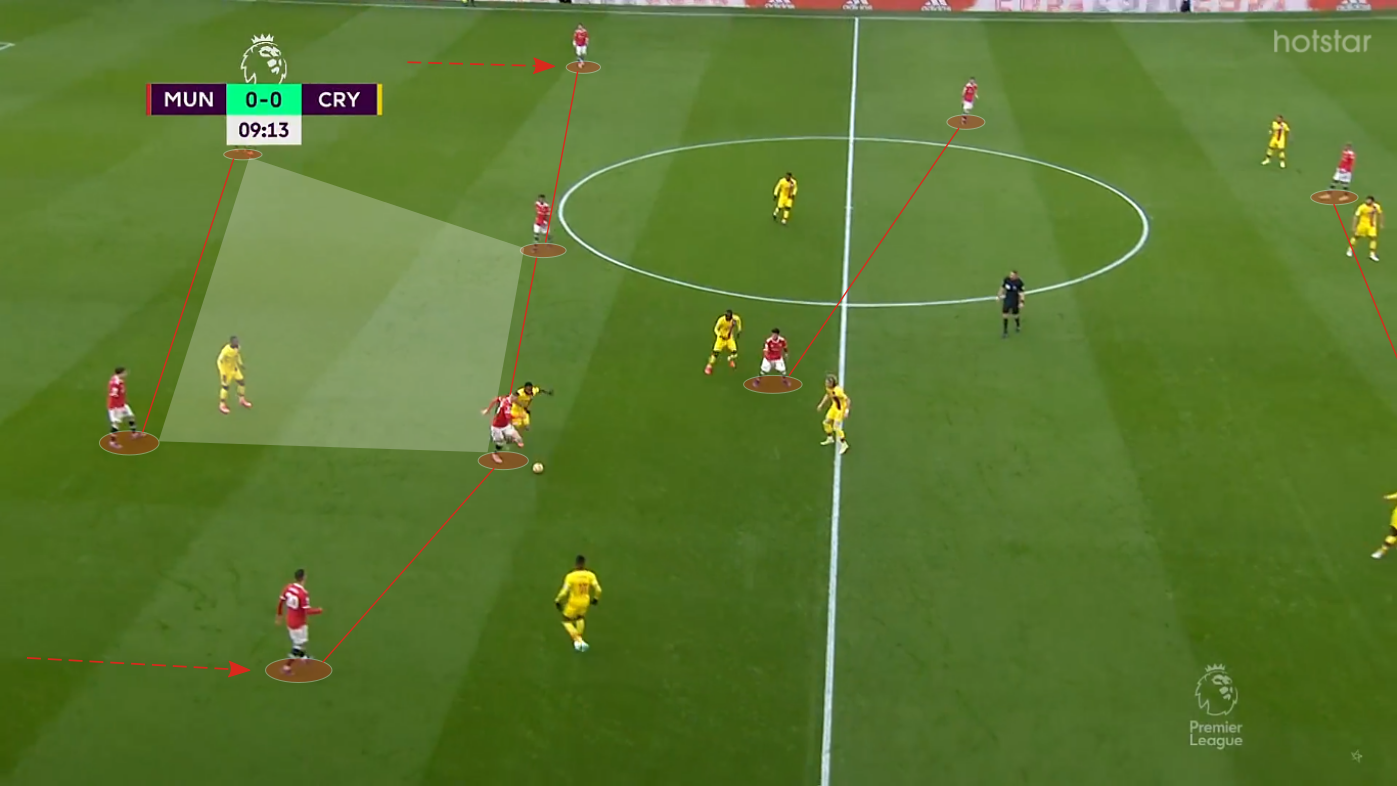 After weeks of speculation and excitement about Ralf Rangnick’s arrival at Manchester United as their interim manager, the day of his debut finally arrived as he took charge of his first Premier League match at Old Trafford against Crystal Palace.

The 63-year-old German has a reputation of building clubs from scratch, but his first managerial job in England is different as his main task is to stabilise and perhaps even restore some of United’s long-lost glory.

The biggest doubt about this appointment was whether Rangnick would instil his philosophy into the players in such a short span of time with a terribly congested fixture schedule.

However, we already got to see some very encouraging signs on that front within just two days after he officially took over, as United looked a transformed team against Palace.

There were no changes in personnel to the starting line-up from the Arsenal match in midweek, but the formation did change to the 4-2-2-2 that many people predicted.

Rangnick spoke a lot about control in his first press conference as the manager of United, and that is exactly what he got as his side improved drastically relative to what we had seen earlier in the season.

This table highlights how United looked better in almost every metric that could be used to measure control over a match, apart from their pass completion rate, which is understandable given Rangnick’s direct style of play which involves riskier passing.

Apart from that, they performed dramatically better particularly in terms of field tilt (a metric that measures a side’s share of possession in the attacking third relative to that of the opponent) and PPDA (Passes allowed Per Defensive Action — a pressing metric where a lower score indicates better performance) which was nearly halved.

With a basic overview of the statistics, let us now take a look at how United operated on the pitch.

In possession, their shape changed slightly to a 2-4-2-2 with the central midfielders staying fairly close to the centre-backs while the full-backs pushed forward.

Building from the back, the shape stayed largely the same, with the only change being David de Gea splitting the centre-backs…

…though the keeper kept his involvement minimal with just 20 touches — fewer than any other starters.

This was not a problem because Crystal Palace never pressed very high up the pitch.

There is a clear left-sided bias here even though Diogo Dalot pushed forward to a fairly similar degree as Alex Telles, as these heatmaps depict:

The aforementioned asymmetry in possession is also backed up by the fact that over half of United’s attacks developed down the left.

As we saw above, the full-backs are not the reason for that, and neither is Palace’s shape because Wilfried Zaha and Jordan Ayew applied the same number of pressures in the match (21).

The real issue was in central midfield, where Fred had a significantly better game than Scott McTominay.

…while the Scotsman, albeit in a slightly more conservative role, failed to replicate that and was not involved as much with just 48 touches compared to Fred’s 91.

McTominay’s off-ball positioning wasn’t always perfect either as he failed to offer a passing option or indeed open the passing lane to Dalot at times.

In the below image, for example, he is too central and stuck in the cover-shadow of Christian Benteke, which means he is neither able to make himself available to receive the ball nor distract Zaha and prevent him from closing down any passes to the right-back.

This is why the Red Devils clearly found more joy while getting forward on the left side.

Nonetheless, they could get into the final third quite regularly as the field tilt stats showed, so this was only a minor concern.

The bigger problem was getting into good goalscoring positions.

United ended the match with zero big chances created and a tally of 1.1 xG from 16 shots.

That equates to roughly 0.06 per shot, which is well below their seasonal average of 0.10.

Their shotmap reflects this as the home side hardly fired a couple of shots from the central area of the box.

The goal that ultimately won them the game was a terrific strike from a midfielder on his weaker foot which was very nice to watch as a spectator, but certainly not a sustainable way to find the back of the net.

However, since Rangnick only had one training session with the squad pre-match, this has to be expected given how they seemed to focus on other areas where there were huge improvements.

Their structure in possession seemed to be one of them, and they fared even better in terms of pressing.

In a high-block, United maintained their narrow 4-2-2-2 with a clear objective to force the opposition wide.

They had a very clear pressing trigger – the pass out to one of Palace’s full-backs.

As soon as the ball was received, the corresponding wide midfielder would make a curved run to force the pass back to the centre-back.

Thereafter, the striker on that side would either take over and make a similar curved run to force the ball further back to the goalkeeper…

…or the wide midfielder would continue his run and do so.

The player making this run would further close the keeper down and force him to find the other centre-back, who would be duly pressed by the striker on the opposite side.

It should be said that Cristiano Ronaldo answered all doubts about his ability and willingness to work off the ball here, as is evident in the example below.

The centre-back on the ball would then have no choice but to pass to the other full-back, who would need to punt it forward under pressure, which would obviously affect his accuracy.

If he tried to go infield, the central midfielder on that side would step forward and try to win the ball back…

…and if he tried to go down the line, the United full-back would act similarly.

Unsurprisingly, therefore, most of United’s defensive actions in the attacking half came in the wide areas.

Further back, they dropped into a 4-4-2 mid-block with the wide midfielders dropping back and a similar focus to force the opposition to progress out wide.

Although United did not really show the sort of counter-attack threat that most Rangnick sides typically pose, they did an excellent job of counter-pressing and containing Palace.

Overall, clear imprints of Rangnick’s principles were visible all over this performance, and the execution by the players was also very encouraging.

Ultimately, the biggest thing is the three points in the bag, and the Red Devils came away with just that.

There is still lots of work to be done before United are fully transformed into a tactically world-class side, and Rangnick may not even have time to complete that before his interim tenure ends.

But, he very much seems to be pointing them in the right direction.

This match marked the beginning of a new dawn at Old Trafford. Now, we must wait for the sun to shine in all its glory again.