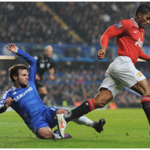 What. A. Game! If there ever was a marque game for the Premier League it was this one. Great goals, drama, penalties, a wonderful comeback, and horrible refereeing. A lot of people are of the opinion that Howard Webb was Uniteds best player of the day, but the “best referee in the world” had an off day for both sides. United and Chelsea got crucial decisions against them, some more obvious than the other, but as most great United games go the ABU fanbase quickly came out with refereeing decisions to try and overshadow a wonderful comeback. Who can forget the 5-2 comeback win against Spurs in 2009, the first goal coming from a penalty that was given “only because it was at Old Trafford”? Or the 3-2 comeback at Blackpool last season, with literally everybody trying to point out how Rafael should have had a penalty awarded against him rather than look at Fergie’s brave, and decisive decision to take Rooney off for Hernandez with 30 minutes to go?

This was another great United comeback, and credit must be given to Sir Alex for yet again making some game-changing decisions. Because it was those which got United the draw.

With Ashley Cole out, most people had Antonio Valencia as United’s most vital attacking asset in this game. Going up against Bosingwa he should have found it easy, or so we thought. For most of the game it was this duel that put Chelsea in the driving seat. Not Valencia against Bosingwa, but rather the Ecuadorian against Malouda. Chelsea’s Portuguese full-back had a rather easy task, staying on the outside and forcing Valencia into a more narrow position where Malouda always stayed ready to pounce. The Frenchman was never more than 15 yards away from our right winger, and he was stopped time and time again. Most of his contribution in the first half became short passes or through balls up the pitch, one of which found Rooney who could not find Welbeck with his effort. Our Antonio only had one take on during the first half, and only got one cross in which was easily dealt with by Cahill.

On the other flank there was Ashley Young against Ivanovic, and the Englishman found it difficult in his first game back from injury. Despite having an advantage in pace he never really got in situations where he could ghost past the Serbian, and his lack of match-fitness was there for all to see. Three times he collided with Giggs, the last one ending with a free kick for Chelsea in which Luiz scored from. Ivanovic made sure to get stuck in with some tough challenges going unpunished, and in the end you have to ask yourself how he managed to stay on the pitch for 90 minutes. Despite him making it difficult for Young, United’s tactics did not help him out much either. Evra was reluctant to overlap fearing Sturridge’s pace, and Giggs was too slow to get out wide unnoticed with Essien following his every step. Where Chelsea stopped Valencia by double marking him and forcing him inside on the right, they made sure Young was never going to get inside. As a right footed left-winger he would always try to get on his strongest foot, but Ivanovic did his job and expect for one shot the Englishman was more or less invisible. Defensively he did a great job stopping Sturridge and Meireles, but attacking wise he was useless. 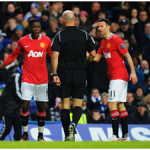 For the first 45 minutes, both Welbeck and Rooney seemed off the pace. Wazza’s passing was poor and often hesitant, while Welbeck’s movement became useless with Rooney more or less staying away from the penalty area. Young Danny did a good job taking Cahill out of the game, bringing the right-centre back wide and high opening up space for others, but no-one made the necessary runs. Luiz’ is potentially the worst positioned defender in the Premier League, incapable of staying focused for a full 90 minutes, and it was a shocker how United did not manage to take better advantage of it in the first half. With Welbeck dragging Cahill away on every run and Luiz being all over the place, a simple run by Rooney or Giggs in behind the Brazilian could have gotten United the goal they desperately needed. But no. Instead of looking to pass into areas that Welbeck opened up, the ball always went towards the big guy, ending up with United losing the ball more often than not. Both flanks were shut down, and long balls over the top towards Welbeck broke down attack after attack for United. The one time Rooney did pick up on Welbz’ opening run United got their best chance of the half, with Rooney’s pass across the box being just a little too short for Danny to poke it home.

If there is one striker in the Premier League that has a good track record against Manchester United, it is Fernando Torres. Despite having a quiet season, he always seems to find her form when he faces United. He was well contained by Evans and Ferdinand for most of the game, but simple lapses of concentration could have cost us deeply. His cross for Mata’s goal was excellent, and had he taken his shot when through it could have been game over for the reds. Evra and Evans performed admirably for most of the game, making sure Sturridge and El Ninõ spent most of the match in relatively safe areas. But the true colossal of this game was Rio Ferdinand. The experienced Englishman always seems to be at his best when he faces the Spaniard, and a few years ago he seemed like the only defender in the country who could stop the, then, deadly striker. Rio kept close to Torres at all times, winning races, getting the ball out, winning every duel, and had it not been for his leading performance United could well easily have suffered more. Rafael had a shocker on the right back, seemingly not knowing what to do against Mata letting him get free time and time again, but whenever they got past him Rio was there to cut them out. Leading by example.

United were getting nowhere through the flanks or passing it to Welbeck, and after 57 minutes Fergie made the sub that changed the game. Hernandez came on for Young, and the little Mexican created total havoc in the Chelsea backline. Where Welbeck had attacked Cahill, the little Pea went straight to Luiz and made sure he made his presence count. Rooney still stayed out of the box, but with a selfish striker up front he had less to do. With Luiz as the left centre nd inback, he started runs there and went in behind Cahill, dragging Luiz to places he did not want to be. Left, right, backwards and in behind, the little Mexican was everywhere! At one time in the second half Luiz stopped on 18 yards, seemingly confused about what he was going to do, giving Hernandez 4 seconds to position himself and header back to Rooney who shot just wide. United finally had a central-based attacking presence, and with Chicharito running them ragged Rooney got more time and space. Through balls by Rooney were picked up by Chicho, with the two of them interchanging passes which led to chance after chance for United.

The second change Sir Alex did was let Evra attack freely. He had not made a single forward run in the first half, but with United 3-0 down risks had to be taken. Despite not being the best crosser of the ball, our captain does have some pace and skill about him, and it was his will to attack that won us the first penalty. With Young off, Evra became our biggest threat down the left. Rooney took over Giggsy’s position as the attacking midfielder, and Giggsy covered Patrice whenever he went forward. Neither Ivanovic nor Essien knew who to mark, and United started to take over.

Sir Alex’ last change was putting Scholes on for Rafael, with Valencia shifted to right back. Masterstroke! United took over in the middle, and with Scholes on the pitch United started to keep possession. One goal down with 20 minutes to play rushing into attack was not found necessary. Scholes loosened some strings, and with Giggsy shifted out to an left attacking midfielder possession play became key to United. Slowly but surely they crept up the pitch, with Scholes being the architect of most attacks. Always unmarked, he swung the ball from left to right, right to left, and with Chelsea having tired legs he had a stroll. Him and Rooney dictated the play, tiring out Chelsea’s midfield, and with Hernandez looking like he had the mother of all sugar-rushes the blue heads started to drop.

The main duel going into the match was Valencia against Bosingwa, or rather Valencia against Malouda as it later turned out to be. And we can only praise the Gods’ for the Ecuadorians fitness, as it was this that got us the vital point. With 6 minutes remaining, the now position right full back ghosted past Malouda after an interchange with Welbeck, and got to only his second cross of the game. 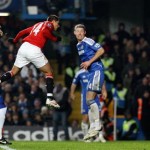 Thankfully it found Wayne Rooney, and when Giggsy picked up the rebound there was only one outcome. Chicharito, having made Luiz his toy for 30 minutes or so, again got away from his marker and scored his 3rd goal against Chelsea since arriving in England. He really is Chelsea’s nightmare, particularly their Brazilian defender who got outplayed so badly by the Mexican at Old Trafford last season that he was subbed off after 45 minutes. United could have had their 4th goal on 93:32 minutes, when Giggsy put a marvellous pass in for Hernandez only for the Mexican to be blown offside. Having seen the incident three times, I have some serious question marks. Every time I see it, it looks more like onside, and if so United were robbed of their first Stamford Bridge win in 10 years.

In the end, Villas-Boas had no plan B. He chose to close United down the flanks, which he in fairness did to great effect. However, as soon as United started to go central and rotate with overlapping and outside-attacking midfielders, they lost the game. Scholes yet again proved how vital his acquisition 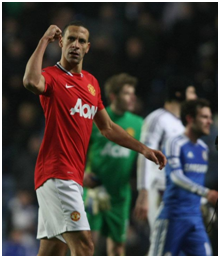 is to the side, and Hernandez showed that you can never rule out a true goalscorer. He has got 8 goals now, which is only 2 worse off than he had at this stage last season. On the downside United conceded their 4th and 5th own goal of the season, with Rio’s own goal also being the 11th set play they have conceded in 2011/12. Offensively United are as flexible as they possibly can be this season, and despite having the longest injury list anyone has seen in years they have shown that they can compete with anyone when they are in top gear. Defence needs to be sorted out though, and fast!

Man of the Match: Rio Ferdinand