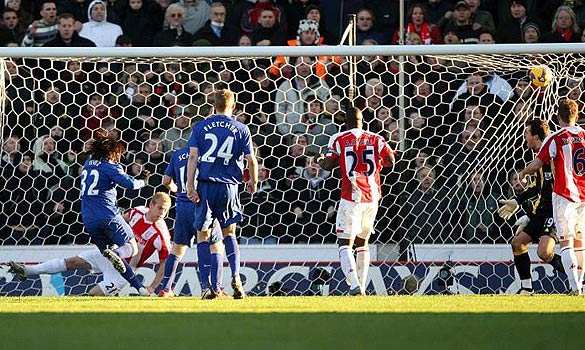 Having edged into the fourth round of the Carling Cup, albeit with an ultimately monotonous performance, the Premier League returns for United on Saturday and a somewhat tricky trip to the Britannia Stadium awaits.

Stoke have started the season in a pretty decent fashion having picked up seven points already and been extremely unfortunate not to have come away with something more last weekend against Bolton and previously against Chelsea too.

You would expect that will give them legitimate confidence that they are capable of getting something against us and expect nothing short of a hard-fought and closely contested encounter.

The corresponding fixture last season was a noticeably tight and tense affair, certainly from a United perspective, as a late winner from a certain Argentine striker claimed all three points against the resilient Potters on Boxing Day.

Ferguson rung the changes on Wednesday evening and expect similarly wholesale changes as the league focus returns. The major confirmed team news is that Ben Foster, who hardly covered himself in glory with his display in the Manchester derby, will continue to deputise for Edwin van der Sar.

The back-four almost inevitably picks itself, with Patrice Evra and John O’Shea returning at full-back while Rio Ferdinand should line-up alongside Nemanja Vidic.

I don’t expect Sir Alex to deviate too much from the midfield that played against City although if anyone was to drop out, I would expect it to be Anderson and Park for Scholes and Nani respectively.

That should see Ryan Giggs keep his place in the starting eleven and after having run rings around Micah Richards on Sunday, it was revealed this week that Giggs had created more goalscoring opportunities than any other player in the Premier League with 24.

It’s little statistical titbit’s like that that help give an indication of just how important the Welshman has been to the United cause thus far this season, even at 35-years-old.

It’s fair to say that going away to someone like Stoke may bring about a change in formation, although with the opposition most likely lining up in a 4-5-1 formation themselves, you would think it would be a wise move to avoid the temptation of going like for like and adopting the 4-4-2 system that has served us so well with Rooney and Berbatov lining up in attack.

As well as confirming that Foster would indeed be starting on Saturday, Ferguson moved to provide some good news regarding the recovery of a somewhat forgotten midfield man, Owen Hargreaves, who has been out of action for the last nine months as he recovers from double knee surgery.

“Hargreaves is back now and I hope the boy gets a break and continues his rehab without any further mishaps,” the United manager said.

“It’s been a long time for the lad. Normally, when a player has been out for that length of time, he has been helped by doing his rehab with the other players.

“But the fact he did it on his own in America, under the guidance of Dr Steadman, is not easy.

“He has shown the determination and resilience to see it through, though, and he is now back with us.

“I feel that maybe it will still take us four weeks to get him into the rhythm of training again and get to the point of match-play, but hopefully he is on the way back.”

Stoke boss Tony Pulis, meanwhile, spoke of the departures of Carlos Tevez and Cristiano Ronaldo in the summer, praising the likes of Scholes and Giggs for the way they continue to defy the odds with such assured performances.

“Clubs do not get over losing players like Ronaldo and Tevez quickly,” he said.

“It is very difficult whether you are Manchester United  or Stoke to lose a player who has been scoring so freely and creating goals for his team-mates.

“The greatest thing for Alex is how well players like Scholes and Giggs are doing. It is pretty amazing they are not just still going but going strong as well.

“It is amazing. When Giggs finishes playing he will be seen as one of the greats of the game, I am sure.”

While the Potters will no doubt have their tremendous support behind them whatever scenario they are faced with during the 90 minutes (plus stoppages!), on paper we certainly have enough quality and we are a side in form with six successive wins.

Stoke will certainly battle for everything and, in terms of physicality, they may just have the edge. Foster will need to have all his wits about him as Pulis I’m sure will be desperate for every conceivable set-piece (including the Delap throw) to be arrowed in and around his six-yard-box. One would suspect it will prove to be the ultimate test for the England goalkeeper following on from events in Manchester on Sunday. Let’s just hope he gets through unscathed.