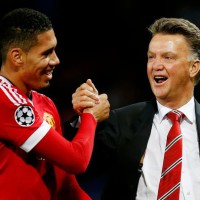 Louis Van Gaal’s philosophy has found a surprising fan as Chris Smalling revealed he has been impressed with the Dutchman’s approach and his capacity to listen to his players.

After a torrid couple of months, United appear to be slightly turning their fortunes around, as back-to-back wins against Derby County and Stoke City were followed by an impressive display away against Chelsea, where United were only minutes short of winning the game.

Smalling said Van Gaal’s flexibility and his interactions with the players have been key factors behind United’s improved performances.

“He’s got his way of working and his philosophy but what people don’t see is the communication among the players,” said the United defender.

“We have meetings about how we’ll press a team or how we’ll play a certain player and he listens to the player’s opinions.”

However, despite the recent turnaround in form, United remain six points adrift of fourth-placed Manchester City but Smalling insisted his side had not given up the fight to reach a top four finish and lift a trophy this season.

“It’s been up and down,” he said. “We’ve still got a long way to go. It’s been a roller coaster and if the season was to finish now, we wouldn’t be satisfied.”