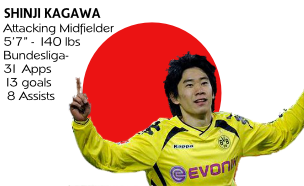 He started his career in Japan at second division Cerezo Osaka, becoming the first Japanese player to sign a professional contract before graduating high school (He signed at the age of 17). By 2007, he became a regular first team starter. By 2010, his agent was former Borussia Dortmond player Thomas Kroth, and this familiarity was key in a â‚¬350,000 transfer that summer to take the young star to Borussia Dortmond in Germany.

In Germany, he made his first appearance for his new club on the 23rd of August 2010. He had a great first season for the club, scoring 8 goals in 18 appearances. He quickly became a fan favorite after scoring 2 goals in Borussia Dortmond’s derby game against Schalke. Unfortuantely, his quick start was derailed when he broke his metatarsial bone in January at the 2011 Asian Cup which forced him to miss the second half of the Bundesliga season. Even though he missed half the season, Borussia Dortmond won the Bundesliga title and he was included in Bundesliga Best XI. 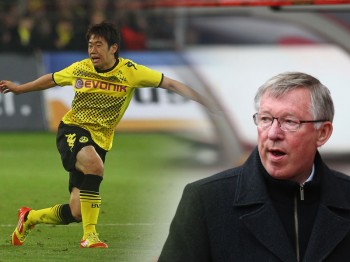 Shinji Kagawa recovered from his injury in time to start the 2011-2012 Bundesliga season and he was able to start the new season off in similar fashion to how he played before his injury. He made 40 appearances in all competitions, scoring 17 goals and picking up 8 assists. In January, Borussia Dortmond’s key young playmaker, Mario Gotze, went out with a hip injury that kept him out until April but Shinji Kagawa was able to pick up the slack and many Dortmond fans struggled to notice that Gotze was missing from the field. One of his finest performances came in the DKB Pokal Final against Bayern Munich, when he was able to pick up a goal and an assist with Sir Alex Ferguson in attendance to scout him.

On the international side, he played for the Japanese National team at the 2007 U-20 World Cup. In 2008, he played for Japan at the 2008 Summer Olympics at Beijing China, even though the team struggled and finished last in their group. That same year he made his senior international debut during a friendly at the Kirin Cup. He received several caps for Japan, but he was left off the 23 man roster for the 2010 World Cup. The following year he did make the squad for the 2011 Asian Cup, and he had a strong tournament before breaking a bone in his foot in the semi-final game against South Korea. So far, he’s managed to pick up 31 senior caps for the Japanese National team, and he’s netted 10 goals for the Samurai Blue.

Shinji Kagawa plays as a strong attacking midfielder. He is normally used behind the central striker, but he has also repeatedly been used on both wings. He has great vision and passing ability. He doesn’t play long diagonal balls like Paul Scholes, but his short quick passing game is spectacular, and his passing style would fit in well with tiki-taka teams like Arsenal and Barcelona.

He has a great head for the game, and he has great vision on the field. He can play great defense splitting passes, a quality that Manchester United missed desperately in this past season. In the last Bundesliga campaign, he averaged 1.8 key passes a game. He has great movement, both on and off the ball. Without the ball, he is constantly moving looking to find open space to trouble the defense. He’ll move laterally from side to side to get into the space between the opponent’s defensive lines. His constant movement can easily tire out the defense and it makes it hard for the defense to track him for a full 90 minutes. His great movement not only helps him get into open spaces to receive the ball, it also pulls defenders out of position and opens spaces for other players to play into.

The 23-year old Japanese International has a great first-touch, and truely exceptional technique, and that makes it rare for him to turn the ball over. He’s able to use his great first touch, and excellent ball control skills, to operate in traffic and press an attack forward. He also will use his first touch to play quick passes forward to keep the defense off balance.

When he has the ball, he’s not afraid to run at defenders and take them on. He had 2 successful dribbles a game in the Bundesliga. He is a fairly small player, but he does well holding onto the ball against larger defenders. He has great balance and agility, and this helps keep him on his feet when lesser players would end up on the grass. His balance and agility, combined with his exceptional touch and close ball control, allows him to receive the ball and create offense even in a tight, highly congested midfield.

His shooting ability will bring a much more direct dangerous threat in the midfield for United. He scored 13 Bundesliga goals even though he only averaged 2 shots a game for Borussia Dortmond. He has a powerful accurate shot that he can unleash anywhere within 35 yards of the goal. He strikes with power and is able to put the ball into the corners of the net that make him a tough shooter for goalkeepers to deal with. 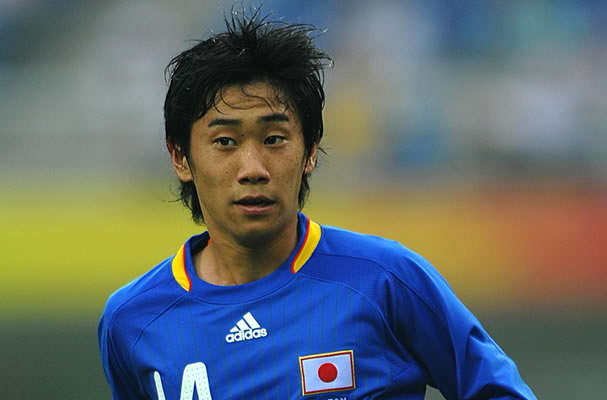 Jurgen Klopp, the manager at Borussia Dortmond, prefers his teams to play a 4-2-3-1 system and Shinji Kagawa slotted in well for this formation. He’s capable of playing any position across the three attacking midfielders, but he’s proved the most effective when playing behind the central striker. He can’t be catagorized as a typical Trequartista (or Number 10), as he prefers to play closer to the striker. He is most dangerous at the edge of the box, moving to find open space to receive the ball in and getting the space to turn and run at a defender.

Shinji Kagawa is a hard player to catorgize, as he is a more dangerous scoring threat than most trequartista’s but he is a better play maker than most second strikers. He was dangerous all season long operating behind Pole Robert Lewandowski, and they linked up together well to shred many Bundesliga defenses this past season. While his best position is behind the striker, he can be played out on either side but he attempts very few crosses when played out wide, and likes to try and come inside on the attack.

On defense for Borussia Dortmond, Kagawa was detailed to apply pressure on the opponent’s center-backs instead of the defensive midfielders, as most attacking midfielders would. He excelled at this task, and was able to prove his great stamina and work rate as he would apply the same high pressure in the 87th minute that he applied in the 3rd minute. 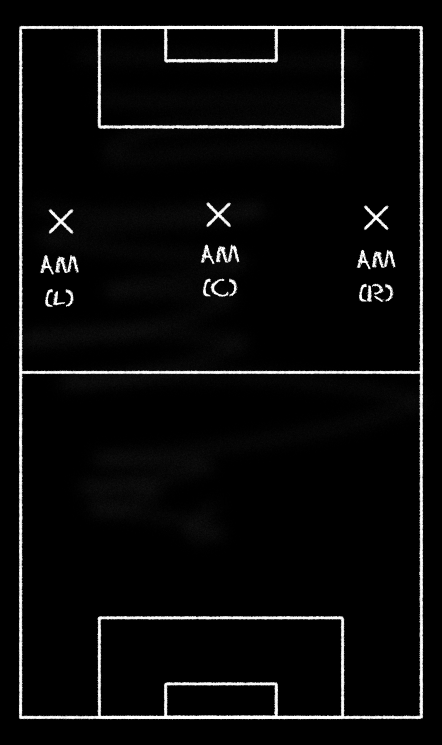 How will he fit:

This is the type of player that Manchester United have needed since Paul Scholes moved deeper in the midfield. The only problem that Sir Alex Ferguson will face is that he will struggle to function as a central midfielder in a 4-4-2/4-4-1-1. Most of this past season Manchester United played a 4-4-1-1 with Carrick and Scholes/Jones playing as the central midfielders, with Danny Welbeck or Javier Hernandez up front and Wayne Rooney operating as a “Nine and a half” behind the striker in the hole to link the midfield and the attack. Most people are suggesting that Sir Alex Ferguson will have to switch to a 4-2-3-1 to accomodate Shinji Kagawa, but there are some issues with this.

Manchester United cannot play a standard 4-2-3-1 like Manchester City plays at the moment. The Red Devils lacks the defensive midfielders to play ahead of the front 4. In addition, Antonio Valencia functions as a traditional winger and he doesn’t really fit in the line of 3 attacking midfielders. However, United can play an attacking variant of the 4-2-3-1. The only difference between this and the 4-4-1-1 they played this past season is the player behind the front striker. In a 4-4-1-1, you play a second striker or deep playing forward, while a 4-2-3-1 has a midfielder behind the front striker.

A great example of this formation can be seen in the season ending game against Sunderland. In that game, United came out in a 4-2-3-1 with Giggs playing behind Rooney. This was a great game for United, as Giggs, Rooney, and left-winger Ashley Young, were able to link-up together all game and easily carve up their defense. They played great one-twos, through balls, and lobbed balls in behind the defense that caused Sunderland problems all game. After a performance like that, it makes one anxious to see how it will work out with a 23-year old midfielder with great first-touch, close control, and excellent passing playing in place of a 37-year old converted winger.

In big games and European competitions, Sir Alex Ferguson likes to play with an extra man in the midfield to control possession so they often lines up in a 4-5-1 and Kagawa should make an immediate effect in those games. Currently the third midfielder tends to be Park Ji-Sung or Ryan Giggs, but these players struggle to create chances for the lone striker who lacks service. A clear example of this could be found in the 1-0 defeat against Manchester City. Would the outcome had been any different if Shinji Kagawa had played in place of Park Ji-Sung? Park Ji-Sung’s main task was to deal with Yaya Toure, and one of Kagawa’s main advantages is his defensive work rate and his effort on the defensive side of the game. Could Kagawa provide the defense to disrupt Yaya Toure while providing more of an offensive punch than Park did?

With Wayne Rooney ahead of him, his great understanding of space and intelligent movement both on and off-the ball will improve Rooney’s performances when he plays up front alone. In addition, his play will also improve the space that Ashley Young and Nani have to work in when they cut in from outside. Lately, most of United’s scoring threats have come from the wings and this allowed the defenses to concentrate on closing down the wingers, but with Kagawa in the middle, it will give United a dangerous threat down the middle of the pitch again. 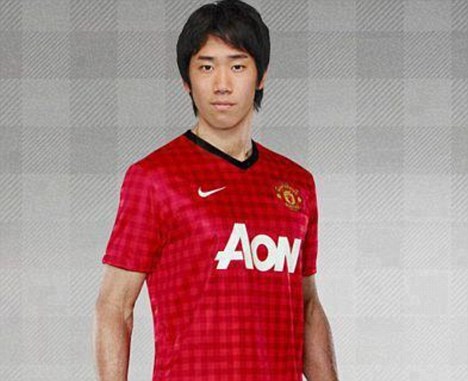 This was a great pick-up for Sir Alex Ferguson. This will give United more attacking choices, and Sir Alex now has the choice of playing Rooney up front alone again, as lately Rooney struggled up front on his own with no service. In addition, United can still use their 4-4-1-1 when necessary and play Kagawa out on one of the wings if needed. But I would expect to see the Red Devils playing more 4-2-3-1 with Kagawa behind Rooney, or Welbeck.

Kagawa will provide a great scoring threat in the middle of the park, while also being able to play the type of passes to split open a deep lying defense that United lacked all of last season. United repeatedly came up against teams sitting deep and they were never able to play that final pass in to open up the defense and create a scoring chance. Kagawa is known for being able to play these passes. His work ethic and persistence will make him a great fit for a hard-working United squad.

Missing out on Eden Hazard doesn’t quite hurt as much with this acquisition, as he cost less than half what the Belgian cost and I have more faith in his abilities after 2 years in a tough German league instead of a fairly soft French league. You can also compare him to a player United almost picked up last year, Wesley Sneijder. They both play the same position, and play a similar style, but Kagawa’s transfer fee was half what Inter would have wanted, the salary is cheaper, and Kagawa is 5 years younger. This leaves transfer funds available to fill other needs.

Overall, I would say this is a great first signing of the summer. Getting the deal done early allows them to address other problem positions, namely a midfield enforcer, and fullbacks.