Scholes’ Injury is a Blessing 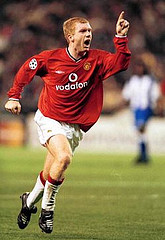 You wouldn’t get that usually in a United site. Especially when someone, of the stature of Paul Scholes, faces the grim prospect of being out of the side for a good month. Not to mention the time he will surely take to get back into his stride, coming back from the long layoff.

Make no mistake, this would have been seen as terrible news had it been last year. But this year, you couldn’t have asked for a better blessing than this.

To stop myself from sounding retarded, by beating around the bush, allow me to explain.

When SAF bought Owen Hargreaves after a protracted saga of over a year, he certainly had plans in mind for the long run. The general belief is that as Scholes is ‘phased’ out of the squad, the midfield engine room will be increasingly dependent on Michael Carrick and Hargreaves to provide for the fuel. Ideally, if we take the Roma situation as a classic example, our 4-2-3-1 formation of the future will have Carrick and Hargreaves playing deep lying midfielders, with Ronaldo, Rooney, Nani and Tevez as our front four, who will interchange, making it extremely difficult for opposition defenders to mark us. Anderson of course will also figure in the front four, although, at the moment, it will really be a toss up between Nani and him. (We haven’t seen much of either.)

Yes, Anderson has been tipped to be the replacement for Paul Scholes, as the player capable of playing in the ‘hole’, but that is unlikely given Rooney or Tevez might be doing that job in the foreseeable future. There is the possibility – given Anderson’s age and ability to play on the left side of the park, as he as admitted that he loves playing left back – that he might be converted to a winger who could also rotate and play across the park. But for the moment, let’s leave Anderson for later and concentrate on the present.

The presence of Scholes, Carrick and Hargreaves provides SAF with options aplenty. He might be tempted, for example, to play all three, but sacrifice one out of his hugely talented flair players on the front. Or he might bench one of the three midfielders available to him for more flair. While we may be tempted to conclude that 4-3-3 will be for Europe and 4-2-3-1 for the League, I am willing to bet the manager to be in some kind of a happy dilemma as to decide the best formation for the game.

Last season, when everyone was fit, our first XI pretty much picked itself. This time, Fergie must tread the thin line of being able to rotate players without disturbing the rhythm too much as to break a ‘winning combination’. In short, he shouldn’t pull a Rafa. So here’s where Scholes’ injury comes in handy. He wouldn’t have to make a decision on who to pick in his central midfield. Hargreaves and Carrick will start (in what I expect to be a fluid 4-2-3-1).

Hopefully Hargreaves should be fit to play in the game against Inter. If not he should be at least able to get valuable minutes in the clutch of games we will be playing between 3rd and 8th of August. (That’s 4 games in six days, to be precise, which also includes the Community shield game against Chelsea.)

SAF will be hoping that these games would help him settle into a good understanding with Carrick – in time for the new season – so that we have a reasonably settled midfield that can go on and build from the first game till the end of August. After which, Scholes will be back to take over the reigns, just to ease up things for our lads.

The fact that Fergie may be forced to pair Carrick and Hargreaves straightaway excites me because, while it may be a bold move, it is a moment the manager and fans have been waiting for, in a long while – the final solution to our midfield conundrum that will eventually fill the void left by the illustrious duo of Paul Scholes and Roy Keane.