Scholes desperately rolling back the years as United sink QPR 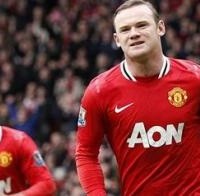 Manchester United opened an eight-point gap at the top of the table following a 2-0 win against 10-man QPR, as Manchester City’s title hopes were dealt a huge blow after they were defeated at Arsenal.

United benefited of a good amount of luck as referee Lee Mason awarded a penalty with the game only 14 minutes old as Ashley Young and Shaun Derry collided in the box.

Young had strayed into an offside position before receiving the ball and the contact between him and Derry was minimal but, 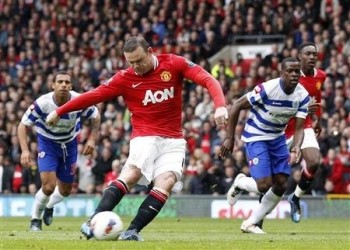 strictly speaking, Mason was correct to send the QPR man off as he had no other choices once he deemed the contact worthy of a penalty.

While Mason will understandably be criticised for his mistake – just another chapter in Patrick Vieira’s book The Conspiracy – the linesman’s blunder was far worse as Young could have, and should have, been flagged offside.

Rooney made no mistake from the spot and set United on course for an eight consecutive home win – the first time United have achieved the feat since 2009.

Despite their numerical superiority, United failed to capitalise as QPR defended well as they looked to preserve their goal difference – the only thing that separates them from the bottom three at the moment.

United, unchanged from Monday night’s win at Blackburn with the exception of Welbeck and Young replacing Hernandez and Jones, dominated possession with Michael Carrick and Paul Scholes looking yet again a formidable pair in the middle of the park. 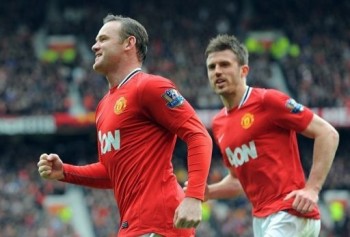 Young went close to double his team’s lead as he headed Valencia’s cross just wide but United lacked tempo as they appeared to get a bit complacent at times, particularly in the final third.

QPR, to their credit, didn’t buckle as some might have expected after the early red card and even had half a chance themselves as Taarabt saw his shot timely blocked by Evans, after the Moroccan had won the ball off Rafael.

That was the Brazilian only mistake of the game as he produced another excellent performance, strengthening his credentials to make the right back position his own.
He could have capped his performance with a goal in the second half but Paddy Kenny produced an excellent save to deny the Brazilian as he deflected the ball against the bar.

A minute later the QPR keeper was forced into action again by a Danny Welbeck strike as United yet again failed to convert their superiority.

There was nothing that Kenny could do, though as Paul Scholes struck the sweetest of shots with 68 minutes gone.

The midfield maestro’s shot flew past Kenny and into the bottom corner, a trademark Scholes’ finish. Scholes has scored three times since coming back from retirement as United won every league game bar the one they drew at Chelsea.

How must Patrick Vieira regret his comments now. 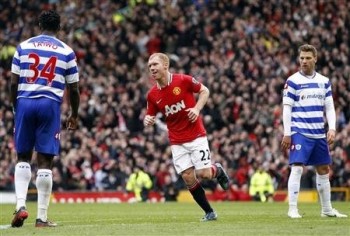 United could have had a third later on as Carrick’s thunderbolt from 30 yards out crashed against the post with Kenny all but beaten.

In the end it was a comfortable, yet perhaps a little flat performance another vital three points for United who have lost only three games this season.

With City slipping further behind after losing at Arsenal, United are now eight points clear at the top with only six games remaining and, for the first time in six months, have a better goal difference than their rivals who have cracked like an Easter egg over the last few weeks.