A quick update on some of the news stories yesterday. There were quite a few interesting reports, especially some quotes finally from Sir Alex Ferguson on the Tevez issue, the unveiling of our new summer signings and a report on Smith.

Sir Alex Ferguson admitted yesterday that the club are close to a deal with Tevez. In fact, according to him, it’s only outside factors, such as the Premier League and West Ham United, that are stumbling blocks for the deal to go through. The club solicitor, Maurice Watkins, is working on thrashing out the details of the deal. But the most interesting part of what he said was this:

“[Club Solicitor] Maurice Watkins has been working on it for a month, maybe more, to make sure the deal is perfectly clear and there are no side issues.”

‘Working on it for a month or more!’ That is brilliant in the sense that it has pretty much typified our transfer business this season. The press didn’t get wind of the Tevez deal until the legal issues came up. So basically, that will be put down as another great piece of signing that has gone under the radar, following those of Nani and Anderson. Well done Fergie, and Gill, and whoever handled the business dealings this season.

Of course, it is satisfying to see the boss appear confident about Tevez’s signing.

Owen Hargreaves and Nani were officially unveiled yesterday. Head over to Manutd.com to read the report. 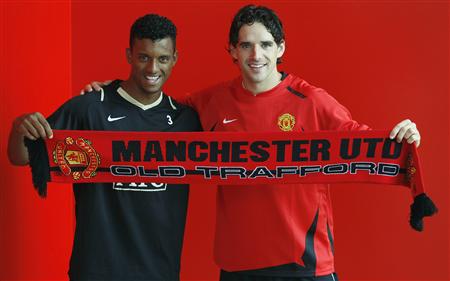 While on the subject of new signings, Hargreaves spoke at length about what he expects to achieve at United, and how he would want to contribute to the club’s success. He was, as usual, effusive in his praise of the club, something he has been for the past year or so. Let’s hope his desire also translates into success on the pitch.

The Mirror thinks that Smith wants talks with Ferguson about his future in United. He must want to have a word or two, I’d imagine.

And finally before I end this, I have a few (deservingly) harsh words for Liverpool Chief Executive, Rick Parry, who thinks top-flight clubs do not need loan deals. This is what that twat of a person had to say:

“At the Premier League we thought that, given the money there is, you didn’t need loans – you should be able to stand on your own two feet. “There is enough money around to make transfer deals permanent.”

Absolute bollocks, I say. The biggest advantage of loan deals is that it allows club youngsters to get valuable first team experience in other clubs instead of rotting away in the reserves. Honestly, if he’s really serious about abolishing loan deals he should realize that the level of football played at reserve level isn’t even as good as the Championship, and doesn’t have the pressure cooker atmosphere and quality of top flight (or for that matter, even Championship level) football. So if you don’t send your promising youth players out on loans, you are never going to see how they turn out to be. The player wouldn’t even get to play in the first team because it’s already loaded with multi-million dollar footballers and a manager would need guts and confidence for that.

So shut your gob, Mr. Parry. Do your multi-million deals, get your players, keep them on the bench till they get bored watching paint dry. Oh yes, then, sell them off instead of loaning them.