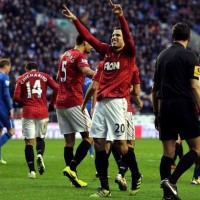 Manchester United hit the ground running in 2013 with a comprehensive 4-0 win at Wigan, to maintain their seven-point lead at the top of the table as they picked up their third win in four matches over the festive period.

Unlike the majority of us that spent the last few days committing to New Year’s resolutions likely to come unstuck within less than a month, Sir Alex Ferguson had been plotting his since last summer when he signed Robin Van Persie. The move has paid enormous dividends so far as the Dutchman produced yet another sublime performance.

Having picked up only their fourth clean sheet of the campaign against West Bromwich on Saturday, United rang five changes for their trip to the DW Stadium. Rafael, Rio Ferdinand, Ryan Giggs, Javier Hernandez and Robin Van Persie started in place of Chris Smalling, Nemanja Vidic, Antonio Valencia, Shinji Kagawa and Danny Welbeck as United returned to a more familiar 4-4-2.

Footballers can no longer indulge in festive mood on New Year’s Eve but nevertheless United looked sluggish and disjointed in the first half an hour, perhaps unconsciously wary of the threat posed by a seemingly routine fixture at this time of the year, for they were beaten at home by Blackburn 12 months ago.

Having lost 14 of their last 15 league encounters against United, Wigan were looking for consecutive wins against their neighbours and controlled much of the possession in the early exchanges as United struggled to control the tempo of the game, with Michael Carrick and Tom Cleverley not their usual brilliant selves.

As it’s often the case against a side like United, capitalising when on top is of pivotal importance. Wigan, however, failed to conjure any concrete opportunities and were punished after 36 minutes when Javier Hernandez netted a trademark poacher goal to put United ahead.

Jonny Evans’ cross from the left flank found Patrice Evra’s unmarked in the Wigan box, the French scuffed his first attempt but had a second bite of the cherry, forcing a good save from Al-Habsi who could parry the ball in the path of Javier Hernandez. The Mexican, who had had a goal previously ruled out for off-side, made no mistake, slotting the ball in the back of the net. 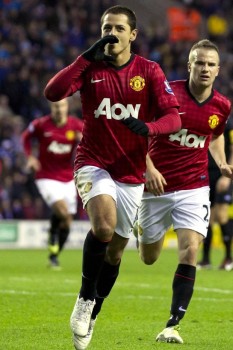 Seven minutes later, Robin Van Persie produced the sort of goal that will draw yet more comparison between him and Eric Cantona for the flair, poise and panache with which the Dutchman brought down Hernandez’s pass, shifted the ball onto his left foot before dancing back to his right and unleashing a superb side footed effort that curled in the far corner were reminiscent of many a goal Cantona scored in his career at Old Trafford.

It’s increasingly evident that the Dutchman’s contribution will be pivotal to United’s chances of regaining the title. Van Persie is more Cantona and Bergkamp rolled into one than Ronaldo, but he has brought a fear factor the club had lacked since the Portuguese departed for Madrid.

United started the second half in cruise control, enjoying large spell of possession but almost came unstuck in the 58th minute as Kone pounced on Di Santo’s cross, planting the ball past David De Gea but was correctly judged to have strayed marginally offside. Less than two minutes later Hernandez came close to add a second goal to his tally as he pounced on a superb delivery by Ashley Young but saw his effort flying over the bar.

The Mexican, however, was not to be denied three minutes later as he was the quickest to react after Van Persie had struck the wall with a free-kick. The ball roll back towards Hernandez who drilled it past Al-Habsi with an excellent first-touch finish to score his eight league goal of the season.

With the game done and dusted, there was time for the traveling fans to go through their repertoire of songs, serenading virtually every former player, from George Best to Eric Cantona and Ole Gunnar Solksjaer. There was also a chance for Sir Alex to refresh his squad, Shinji Kagawa and Chris Smalling replacing Michael Carrick and Rio Ferdinand before Danny Welbeck was introduced for Ashley Young.

And it was Welbeck who, with less than three minutes to go, pounced of another defensive mistake to square the ball back to Van Persie who made no mistake from close range to seal a 4-0 win, a world away from the disjointed performance United produced in the same fixture back in April, where a 1-0 defeat derailed their league campaign.

Ten points in four games and two consecutive clean sheets made it a Christmas to remember and an even better start to 2013. That New Year’s resolution made back in August looks increasingly like a masterstroke.