Rushing Rooney Would Be Foolish 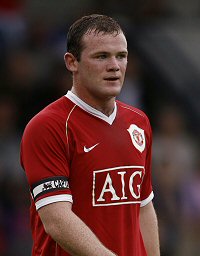 It is all over the news and it was certain to crop up sometime sooner or later. If Rooney manages to make it for the Everton game it would be a record of some sorts for a player who broke his metatarsal just four weeks ago for the millionth time.

The player is desperate to get back to the side. There is no doubt about it. It was the first summer in a while where he stayed injury free and away from a major international tournament. Coming off a season which was labelled by the media as poor, by his own standards, he was hungry to impress and was looking really good in pre-season.

True, he scored 23 goals last season. But for long spells last season, he did endure some frustrating moments where things didn’t go right for him. While setting up goals aplenty, we didn’t quite rely on him to perform well as we had done in earlier seasons – thanks in no small part to Ronaldo’s outstanding season.

Fergie jokingly said Rooney wanted to take a painkilling injection against Tottenham. It was a measure of Rooney’s almost superhuman recovery qualities (and of course, his intense desire to be involved in every game.) But such things should be treated with utmost care. He is, after all, only 21 and has already suffered three fractures to his feet. What we need from Rooney is a future Mr. Legend, not another future Mr. Glass – having one in our ranks is trouble in itself already.

While Rooney may claim he is ready for Everton, SAF would be better off to plan his return and ease him into the side as slow as possible, so that he does not have to face any reaction that would further push his return. Hopefully he has the good sense to learn from the World Cup of 2006, where Rooney took a while to get back to full fitness which, in a way, contributed to a slow start to the season.

Especially, now that we have Ronaldo and Saha back in the side, with Tevez present to play off Saha – it looks more likely that United will play Rooney only if it was absolutely necessary.

So what do you think? Should we rush Rooney or will we be okay without him?

And yeah, Vote for Red Rants. If you haven’t already. I promise it will take you just two minutes to register and vote!
(Those bothered by my persistent begging, bear with me till October 19th. Others can read this. )