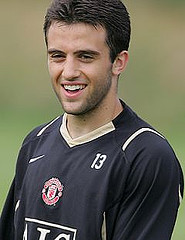 While the attention has been trained on the exploits of the new signings in Asia, of the likes of Nani & Co., Rossi has been quietly warming up to the next season in style back in England. Since there hasn’t been adequate reports on his progress I thought I can very briefly touch up on that.

Rossi is playing for the United reserves team at present. He’s already played away at Fleetwood Town. In that game he inspired the team with his work rate and finally earned the team a draw by scoring at the 89th minute.

Of course, thanks to limited coverage, my source is Manutd.com, so go read the report over there for more info.

He also played a game yesterday against Port Vale. Although the game ended in a 3-2 defeat for the Reds, it didn’t prevent Rossi from getting on the score sheet. Campbell was our other scorer.

While it does seem odd that Rossi’s having to play in our reserve team rather than the team in Asia, it is extremely important that he does get games under his belt – be it in Asia or against lower league opposition. Now that Fergie has himself ruled out sending Rossi out on loan, his presence next season would give us quality in depth.

One hopes that he does get enough games next season, to prove his ability in the Premiership. I’d be really gutted to see him leave for another club without being given a fair chance. [I know, I have said this plenty of times before.]