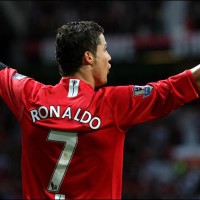 Cristiano Ronaldo has admitted he was “petrified” at the thought of wearing the shirt that had belonged to David Beckham.

The Portuguese, not the sort of man one would normally associate with a lack of confidence these days, arrived at Old Trafford a month after Beckham had departed for Real Madrid and revealed he had no intentions of taking on the famous number 7 shirt.

“I was petrified as I knew Beckham wore that shirt. But I took on the challenge and since then it has been my lucky number. I have won everything in football with that shirt.”

It’s fair to say that during his six seasons at United he didn’t do a bad job with the number 7 on his shoulders.