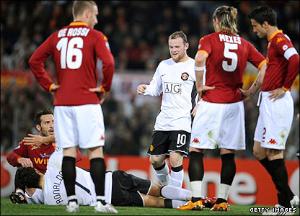 Manchester United won 2-0 at the Stadio Olimpico thanks to goals before and after the break by Cristiano Ronaldo and Wayne Rooney. The Red Devils take a vital 2-goal lead into the 2nd leg, to be played on Wednesday, 9th April 2008 at Old Trafford. The semi-final beckons, and with it another crack at history.

Highlights (You can read the play-by-play match report here on ManUtd.com):

Cristiano Ronaldo scoring an away goal in a crucial game for Manchester United – showing a resolve that seemed missing in seasons gone past.

Wayne Rooney’s all-round performance, easily the man of the match for his work-rate, creativity and commitment. Ronaldo stole the show with his goal but the rest of the game was more about Rooney.

Vidic’s injury – a knee strain as he landed awkwardly after jumping for a header – will be a cause of concern but hopefully it’s not a long-term injury like last season.

Roma’s wastefulness in front of goal – granted, by the end of the game both teams had their fair share of chances but there were periods of time before both goals that Roma had clear-cut chances to score, and they bottled it. For United to grab those crucial away goals in difficult games – at Lyon and now here at Rome – is a good sign of maturity from their players.

I watched this game to crack the puzzle that is United’s away form in Europe, and there’s a lot to be learned here (at least for me).

For starters, I realised today, not so much from how Ferguson started with Carrick and Anderson but how he persisted with Ronaldo and Rooney in the previous game against Aston Villa, that his management style is based on consistency and self-belief. Other managers may be superior tacticians (Rafa Benitez), and others better trainers (Arsene Wenger), but there are few in the world today (if we’re modest) who can match Ferguson for his ability to motivate his players and play to their strengths.

It’s the most important quality a manager can have – Mourinho used to great success with Porto and Chelsea but Ferguson has done it for 2 decades, and he’s as good as ever.

Secondly, United tend to play very deep and hold off from the opposition, not committing to tackles or tight marking. It can prove to be their downfall at times – as Benzema showed with his goal in the 2nd round – but for a team that is more instinctive than a sharp tactical system like Chelsea or Liverpool and more fluid than the clockwork system of Arsenal, it is perhaps the best way to go.

I had hoped that Carrick or Anderson would have sat in front of the defence and shielded them – and there were times that it was necessary and would have United some grief – but Ferguson has eschewed that holding midfielder system and prefers to let players move in and out of positions as the situation develops. It’s more fluid, it’s perhaps more open to unlocking by a skillful attack but against Roma tonight, it was good enough.

Mind you, Vucinic broke through a couple of times, Panucci missed a sitter and there a couple of other good chances spurned but that was more because of a slightly shaky defence (and a strangely subdued Rio Ferdinand – sporting a black eye and not at his best) than because of Ferguson’s tactics.

This system can be quite frustrating at times (especially when you don’t win) but that’s mostly because we’re used to seeing the hustle and bustle of Premier League football, which as Rafa said in his recent interview makes tactics less important than in European competitions, and there United can rely on their speed, quality of attack and the ability to use their momentum to destroy opponents. When it works (as it has for United in this season and the last) it can be quite attractive, but that same approach here at Rome would have cost United a goal or two, and that’s not a luxury you can afford.

Should United have played like Liverpool or Arsenal – as a team that relies on tactics to nullify the opposition threat or as a team that using their clockwork system of passing and the extra time available on the ball in Europe to carve out wins in enemy territory? This current United side has beaten Liverpool home and away, thrashed Arsenal at home once and were denied a famous away win at Emirates by a late goal, all this season. Form aside, I’d take a fluid and adaptable system that has the capability of working in all conditions over a more rigid system that works perfectly in some situations and completely falls apart in others.

I’m worried about Ferdinand – that black eye (and whatever caused it) seemed to have his confidence down. Hopefully it’s just one game and he’s back on song for the away game against Boro, because with Vidic injured Rio needs to be at his best.

Anderson was poor – he didn’t make the switch from the Premier League to European football too well over the last couple of days and he was either out of position or ineffective with the ball. He has a long time ahead of him to learn, and hopefully this was a learning experience for him.

Hargreaves is a beast of a player who can play right-back, defensive midfield, central midfield, possibly left-back as well, plus is a dead-ball specialist and runs himself into the ground. People have complained about his lack of games, but as an asset to the squad he is worth every penny paid. And while we’re at it, so is Carrick.

Van der Sar and Evra again proved their worth to United – EVDS with a couple of excellent saves but more importantly confident command and control of his area, and Evra with some great defending (though he stayed back more than usual, which was to be expected in an away European tie).
Rooney I’ve already praised – and the lad deserves unreserved praise – but at the center of Manchester United’s charge on both fronts this season is one Cristiano Ronaldo, whose match followed a familiar pattern except for that goal (and that changes everything).

The trick to nullifying Ronaldo has always been to frustrate him – he starts bitching and taking little dives and sometimes that works against him, with the ref becoming biased and the distractions only hurt United’s chances (you take Ronaldo out, you take out a significant part of United’s pace and creativity, especially if there is no Nani or Saha or Tevez on the pitch). For the first 38 minutes or so Ronaldo was marked out of the game and I was already preparing what I was going to say about him – that his lack of temperament in these situations is what holds United back at such junctures – but on the 39th minute Ronaldo produced a gem of a goal that, to me at least, proved how much he has grown as a player this year.

You can’t always influence the game by picking up the ball on the wing, weaving into the center of the park and taking a shot, or if no space is available, falling over and playing for a free kick. When Ronaldo was marked out other members of the United side picked up the slack (notably Rooney, Carrick and Scholes) and when these 3 combined to create a chance, Ronaldo came steaming and slammed a header past Doni for a goal.

Last year’s Ronaldo would have been screaming for the ball at the edge of the box or sulking some way away from the action. This year’s Ronaldo got stuck in, and that proved to be the difference. In the absence of a true center forward Ronaldo has the height, skill and speed (perhaps not always the strength) to play that role, and he’s done that to some extent where crosses and corners are concerned (Rooney still plays the target-man – it’s truly astonishing how many different roles these two play in the United team).

For the remaining 60 minutes Ronaldo didn’t do much, apart from a taking a shot when he should have passed and taking a crack at the goal on the volley when controlling it and crossing it back might have been a safer option. Par for the course for a ‘dim’ European performance by Ronaldo.

Except that he stood up and made the difference when it really mattered.

The final word should go to Nemanja Vidic – hopefully he can make a quick recovery, although I have no doubt in Brown to cover for him.