Richardson is Going, Tevez is Coming, Giggs is Talking 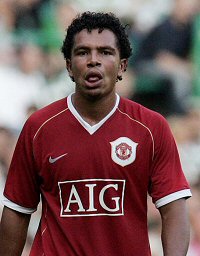 The Heinze thing stopped me from writing this bit yesterday. But here it is.

Kieran Richardson has finally completed his move to Sunderland ending weeks of speculation. He’s one player, lot of us fans would be happy to see leave the club. Clearly inconsistent when given the chance he was always going to be booted out at some point.

While, Fletcher and O’Shea stepped up their game when given the chance, KR was left with a lot to be desired ever since his promising start to his career, and a successful loan spell at West Brom. It has been downhill ever since.

He has been signed for an undisclosed fee which is widely believed to be in the region of 5.5 million. A great price, I’d say. We wish him the best, and I do believe he will be a much better player at Sunderland simply because he will get more playing time.

David Gill has said that the Tevez deal would soon be resolved and we could expect him in OT as early as this week for a medical. He did admit that the deal was “overly complicated” as they had to deal with four parties – WHU, MSI, the Premier League and the player.

Ryan Giggs spoke about how important consistency is for a player to be guaranteed a place in the starting XI next season. Speaking from Tokyo, he said only consistent performances can see players figure regularly in the side and feels that holds true for any player in the side. I think Giggs will be given a progressively lesser role as the season wears on, keeping his age in mind. But the positive from that would be the impact his versatility and experience can have on the team. He might be more effective in shorter bursts off the bench and teach the young ‘uns a thing or two. I tell you, I am not ready to count Giggs out yet. He still has this one season where he will play at least 20-25 games, injury permitting.

In some good news, Neville, Ole and Saha are expected to return to training in August. Neville and Ole should be back earlier, while Saha would be back by the end of August. Foster, on the other hand, wouldn’t be back till March.

Which begs the question, do we need to sign that Argentinian ‘keeper that we are reportedly fighting over with City? I don’t think so.

In other news, the club is expected to field a full strength side today against the Urawa Reds. The game should start at around 11:05 BST. I guess that’s not too long from now. Although, I am not sure I will be able to watch the game here. Plus it’s way too early in the morning stateside, and I doubt I will be up.

If I do, I will post a report on player performances. Otherwise, you guys could write in here, and I’ll try to compile all your views on the team and individual player performances into a post and put it up. Do send in your thoughts on the game here.