Ribery, Sanchez, Silva or Eto’o? Who will replace Ronaldo?! 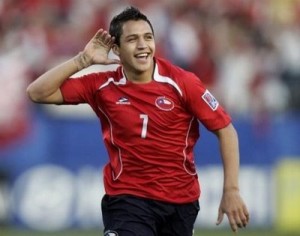 So Ronaldo has finally got his way and his extensively protracted move to Real Madrid is happening. To be honest I’m gutted that we’re losing a truly terrific talent but then again the Madrid switch was an inevitability and in a way it’s good that it’s over without dragging on into the summer which gives us a chance to find apt replacements.

Although rather than discuss replacements for Ronaldo, a nion impossible task as, in my opinion, only Messi comes close to the Portuguese winger and we’ve no chance of landing him, let’s look at what Sir Alex may decide to do with that handsome sum of money.

I’m more inclined to say that we would have had more chance of landing Ribery before Ronaldo’s impending departure. Only because Bayern are clearly going to demand an astronomical fee for his services and while Ribery is a fantastically gifted player, he’s no Ronaldo.

All pessimism and financial constraints aside, Ribery would go some way to filling the boots of our departing number seven and his direct style coupled with his ability on the ball would make him a valuable addition to the side.

My View: I think the price will inevitably be the problem with Ribery. I can’t see Ferguson shelling out stupid amounts of money on any player this summer despite us having a substantial transfer war chest. In this sense Bayern aren’t stupid and they know Ribery is the wanted man now so they can demand as much cash as they so please. For me Barcelona is still Ribery’s most likely destination but then again if Fergie does see the Frenchman as Ronaldo’s ideal successor, he may just make a move.

Probably the most likely bit of business that Sir Alex will do over the next couple of months but it would be outrageous to label Valencia as the heir to Ronaldo’s right wing thrown. No the Ecuadorian clearly won’t have the same impact as the Portuguese but a useful addition he would prove to be nonetheless I’m sure.

My View: This one really does look on the cards. He’s proved he’s a decent player for both Wigan and Ecuador but it remains to be seen whether he would be good enough to make the step-up in the famous red shirt. Wigan chairman Dave Whelan claims Fergie is a huge admirer of young Valencia and if that is the case then now would seem as good a time as any to add him to the ranks at United.

Ronaldo may definitely be on his way but the Tevez transfer episode continues to ramble on. Manchester City are undoubtedly keen to get him onboard and I’m sure Rafa Benitez would love to give us the two fingered salute by making him a Liverpool player.

There’s no doubt in my mind that Tevez would be happy to stay at Old Trafford and now it all comes down to whether Ferguson still wants him at the club. His tireless workrate is certainly an asset but is it really a £25 million asset? That said money can no longer be the excuse in the Tevez transfer saga so we shall we see.

My View: Something tells me that despite Sir Alex Ferguson’s now bulging wallet, signing Tevez still won’t be anywhere near the top of the Scot’s agenda. Although it is fair to say that the permanent capture of the Argentine does make sense. It would appease the majority of supporters and soften the blow of Ronaldo’s departure that’s for sure. I just don’t believe that Tevez fits into Ferguson’s plans but I may be wrong!

The Times reports that Valencia attacking midfielder David Silva is being eyed as Ronaldo’s replacement. With the La Liga side’s financial worries the sale of their top players has become a necessity and we have shown an interest in Silva before don’t forget.

My View: Judging by what I have been reading, I believe that with David Villa on his way to Real Madrid (god knows where this cash is coming from by the way), Silva may just be staying put at the Mestalla. That said even if he was to move on I see Juventus and Liverpool being more plausible destinations. Although Fergie is certainly fond of the Spanish international so there’s nothing to say I could have totally lost the plot with my prediction.

The Daily Star is claiming that Arjen Robben could be on Fergie’s wanted list. There’s certainly going to be competition for places at Real Madrid next season and Florentino Perez may even be willing to listen to offers given our co-operation over the Ronaldo deal.

My View: When we were chasing Robben before he moved to Chelsea I remember thinking that we’d missed out on a top class player there. I still believe the Dutch international is a quality winger now but I don’t think he’ll tickle Ferguson’s fancy. Tabloid gossip at its best for me.

Setanta may be on the brink of crisis but today they’re reporting that this Chilean wonderkid is Old Trafford bound. I’ve watched Sanchez on a few occasions and he certainly has raw talent, not too dissimilar to a Ronaldo of yesteryear.

The 20-year-old attacker has had a decent season for Udinese and Setanta claim Sanchez’s agent Fernando Felicevich is in talks with a number of English clubs over a possible move to the Premier League.

My View: I like this kid, I really do but I feel he may be a little too erratic and too much of an unfinished product for Ferguson’s liking. With the likes of Nani, Zoran Tosic and potentially the likes of Ljajic and Valencia to chose from, I can’t see this one happening.

The man who got the ball rolling for Barca in Rome a couple of weeks back has been mooted as the surprise target by a few of this morning’s papers. Eto’o is a pacey, decisive striker that would be a quality signing in my view and the Catalan giants appear ready to cash in on the Cameroonian this summer.

My View: Like I just mentioned, I’m a great fan of Samuel Eto’o and I reckon he would do a decent job at Old Trafford but unfortunately I really don’t see this materialising. The 28-year-old is apparently being courted by Inter and City and while I don’t see him ending up at Eastlands, a swap deal involving Zlatan Ibrahimovic doesn’t seem too unrealistic.

The Karim of the Crop?
Ronaldo transfer money harder to spend in reality