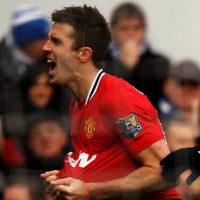 The fixtures are coming thick and fast with United producing result after result at crucial moments and looking sharper by the week. This weekend’s trip to Shepherds Bush in West London to face QPR is yet another chance and yet another crucial moment United need to capitalise on.

Sitting pretty twelve points clear of our closest rivals, United kickoff almost 24hrs ahead of City who face a very tricky looking match at home to Chelsea, by the time they get underway United could be a nerve inducing FIFTEEN points clear.

History and form are on our side and I can’t see us slipping up although it won’t be straightforward. RedRants’ recommended prediction site – Betegy – sees this going United’s way too, predicting a 1-0 win to impound yet more pressure on QPR, Harry Redknapp, Manchester City AND the best manager in England….Roberto ‘he’s definitely cracking up’ Mancini.

Since the inception of The Premier League, QPR have yet to get the better of United taking just two points from 11 attempts.

Since their latest promotion in 2011 we’ve seen them off by two-clear goals each time (0-2, 2-0, 3-1), last season Wayne Rooney opened the scoring in the first minute while Michael Carrick rounded off the scoring on a day when Sir Alex pushed Phil Jones into midfield as Carricks partner and, memorably, Jones was a revelation there. How ironic then Jones is set to miss the game and also a doubt for the return leg versus Real Madrid after his eye catching ‘Destroyer Role’ performance at The Bernabeu. 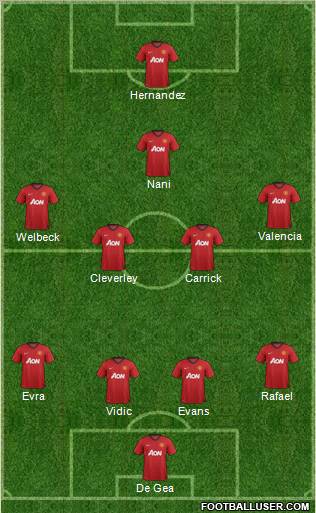 In his press conference yesterday Sir Alex Ferguson commented on Phil Jones’ ankle injury and looked disappointed for himself AND the for lad himself saying Jones is “in with an outside chance of Madrid, that’s all” but confirmed he will miss out this weekend.

Sir Alex also pointed out that Jones was a victim of his own youthful exuberance suggesting Jones was off balance but yet 100% committed to winning a ball he may, in future, think twice about.

The need to give some players game time and others a rest will probably mean a few changes tomorrow with the onus on getting the players up for a fight. This increases the loss felt by the absence of Rooney who leads by example and always carries the fight to the opposition.

Does Sir Alex rest RvP? I think he might be tempted to start him on the bench tomorrow and use Hernandez up top on his own with the industry of Welbeck and Valencia on the wings although I get the feeling there’s a place in the side for Nani who came on to devastating effect on Monday night to sink Reading. The lineup will be interesting and could look a tad unorthodox.

QPR are struggling, they need to start winning and they need to start winning fast if they harbour any hopes of survival. They’re playing for (and getting) draws at the moment so expect a rear guard action, Redknapp will no doubt look for a bonus point from tomorrow knowing there’s more realistic points to be gained after Saturday. It’s United’s job to seize on those sentiments are taken advantage of them.

If you are a betting man/woman, Betegy’s record is quite impressive. Betegy has predicted each of United’s most recent RESULTS to within one goal with the outcomes all correct. Why not see for yourself.

Each week Betegy give percentages of what’s most likely to happen within each game for each team. This week QPR’s highest chance is to score zero, United’s highest percentage is to score just one and the most likely scoreline is 0-1. With the rotation, compactness of Loftus Road and against a team in relegation trouble that could prove to be accurate.

I’m going with a United win and an increase in our lead at the top come Sunday evening with Chelsea gaining a point on Sunday. Sir Alex said in his presser yesterday “we will drop points between now and the end of the season….but so will City”. Let’s hope it’s them and not us who prove the great man right this weekend.

David Gill steps down
Carrick last goalscorer. Well why not, he was last year! Fancy a free bet? @bwin