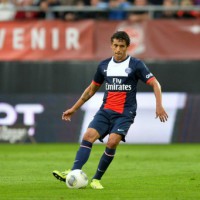 Paris St Germain defender Marquinhos has emerged as a surprise transfer target for Manchester United in the summer. It is well-known that United need reinforcements in defence.

The signings of Marcos Rojo and Daley Blind have only added temporary reinforcement to the inexperienced line. United have been looking at a number of top defenders. They are thought to hold a long-standing interest in Borussia Dortmund centre back Mats Hummels. The poor form of the 26-year-old appears to have made United look at other alternatives. United are back to winning ways in the top four race after a 2-0 win over Sunderland.

Louis Van Gaal’s team has not exactly set the world alight on fire in terms of style of play, but there were a lot of positives from the weekend’s win against Sunderland. The Red Devils created numerous opportunities and were unlikely to see the match only finish as a 2-0 win. Despite the current campaign recovering sufficiently to see United in a much better position compared to last campaign, concerns remain about this squad being able to challenge for titles like the club once did.

It is a long-held belief that United need new signings, despite having spent more than £150 million only last summer. PSG have vast sums of money, but they showed prudence by signing Marquinhos from Barcelona. The signing was completed almost 2 years ago and the prodigy cost the French club an astonishing €31 million. PSG have clearly invested for the future by signing Marquinhos, but there is an opportunity for the French club to be tempted by a mega offer from United.

The FFP rules mean that PSG can certainly do with selling one of their players for huge sums of money and reinvesting in the squad. United remain as one of the few clubs capable of spending more than £50 million on a single player without affecting their commitments to UEFA.

It did not take a huge deal of interest from United to bring out a public statement of desire from Marquinhos at a potential move. The 20-year-old’s camp made it clear that they are not entirely happy with PSG manager Laurent Blanc constantly rotating Marquinhos.

Despite the poor form, PSG are backed by Betfair to win the French Ligue 1 at odds of 1/5. Lyon and Marseille come just behind with odds of 7/2. The French league title, though, is not the major objective for PSG. They are aiming for the Champions League and the 1-1 draw with Chelsea in the first leg of the last 16 sees Betfair expecting PSG to win the title at a distant 33/1.

Marquinhos still has three years left on his contract, but he would see United as a second destination where he could improve his game. At PSG, the constant threat of a managerial change and the associated troubles that it would bring to an established squad continue to remain. PSG are second with table with only one point separating them from leaders Olympique Marseille, but the owners will feel that the squad has underperformed for what they have spent.

Blanc has responded to the rumours by stating that PSG are not interested in discussing a potential transfer for Marquinhos, as they want to keep the player for a long time. He has also pointed out that the former Corinthians star has already featured in 28 matches. Last season, he only managed to 32 games throughout the whole campaign.

An early exit from the Champions League yet again is almost certain to end Blanc’s reign at the club this season.

Time for Van Gaal to embrace the United way
Mata: “Win at Anfield one of the best day of my career”