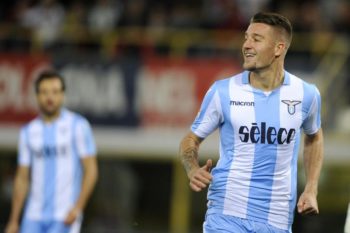 Manchester United’s main priority during this summer’s transfer window is in central midfield.

Jose Mourinho wants to sign two players in this position following the retirement of Michael Carrick and expected departure of Marouane Fellaini.

Assuming Fellaini leaves when his contract expires at the end of the month then we will be left with only four experience central midfielders with the boss predominately playing a 4-3-3 formation.

One player we have been tracking and strongly linked to over the past few months is Lazio midfielder Sergej Milinkovic-Savic.

Reports so far have been a mixture of rejected bids from the Italian side or Manchester United being priced out for the Serbian international.

The Manchester Evening News are now quoting reports in Italy that say we have had a big of £80 million rejected for the 23-year-old.

This seems ludicrous given that the player has never participated in the Champions League and that the club themselves missed out again this past season.

Milinkovic-Savic’s agent, former-Chelsea striker Mateja Kezman, has now given us an idea of what kind of fee we can be expected to pay if we want to bring the number 10 to Old Trafford this summer.

Kezman is quoted as saying:

“We agree that he’s one of the greatest products in European football in the last season.

“I don’t want to talk about numbers, but it’s clear the numbers are going up all the time.”

The report goes on to state that the price tag for Sergej Milinkovic-Savic is currently set at £90 million+.  The Metro reported earlier in the week that the Serbian is Jose’s top target this summer.

Given that we are currently in the process of signing Shakhtar Donetsk midfielder Fred for half that price, and given we already have Paul Pogba and Nemanja Matic, I cannot see Jose Mourinho forking out that kind of sum for another central midfielder.

There’s no doubting Milinkovic-Savic’s ability though.  He scored 12 goals and recorded three assists in the number 10 role for the Rome club this past season and is one of the hottest properties in Europe right now.  However, I’d be surprised if we’d be willing to be ripped off for his services, regardless of the money floating around in the Premier League right now.