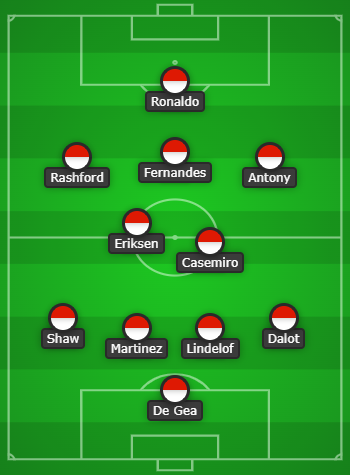 The Red Devils are currently three points adrift of leaders Real Sociedad in their group and the upcoming game appears a must-win in the pursuit of the top spot.

United need a solitary point from their final two group matches to progress, but finishing first in the standings will see them avoid a tricky round of 32 tie.

The group winners are guaranteed their place in the last 16 of the competition.

Erik ten Hag has not rotated his goalkeeper throughout the season. David de Gea has been ever-present between the sticks with loan signing Martin Dubravka occupying the bench. It should be similar tonight in what is a hugely important fixture.

The Dutchman would ideally not want to make changes in defence but he will be forced to. Raphael Varane is out injured until the World Cup. Victor Lindelof is expected to replace him at the heart of the defence. He should partner Lisandro Martinez.

Harry Maguire is fit after his muscle injury but he may not start, having just returned to full training. In the full-back positions, Diogo Dalot and Luke Shaw should retain their places. Aaron Wan-Bissaka is fit again but has hardly played with just four minutes this term.

Tyrell Malacia has seemingly lost his place in the line-up on the back of inconsistent displays. With a win being essential tonight, Luke Shaw, who is now the regular Premier League left-back, should get the nod. He provided a superb assist in the 1-1 draw at Chelsea.

In the centre of the park, it could be Casemiro and Christian Eriksen once more. The former has established himself as the holding midfielder this month and showed his class at the weekend, bagging his maiden goal with a powerful header in the box.

Eriksen has been in-and-out of the starting line-up lately amid fitness concerns, but is expected to start against the Romanian outfit, having been present in the press conference alongside Ten Hag yesterday.

In attack, Cristiano Ronaldo could be reinstated into the starting line-up after serving his one-game suspension. The Portuguese has missed just nine minutes of normal time in Europe this term.

He should lead the line against Sheriff. Marcus Rashford could slot into the left side of attack ahead of Jadon Sancho, who has lacked the cutting edge in the final third for a number of weeks.

Rashford has been equally frustrating with his inability to convert scoring chances, but the England international has been getting into good positions in the box unlike his compatriot Sancho.

Bruno Fernandes is an undisputed starter in the number 10 role ahead of Donny van de Beek, who is back from injury. Antony is expected to feature from his dominant right wing position as usual.

How Man Utd could line up vs Sheriff