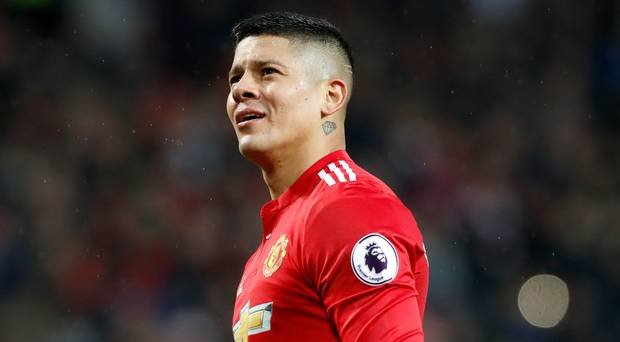 Pascal Gross scored the only goal just before the hour as Brighton & Hove Albion beat Manchester United 1-0 in our first ever visit to the Amex Stadium.

15 days ahead of the FA Cup final and no player put in a performance worthy of facing Chelsea at Wembley Stadium in a dire showing from the team.  None of our three shots on target caused any problems for Brighton goalkeeper Mat Ryan.

David de Gea 6 – Made a great one-handed save to deny Glenn Murray in the first half but didn’t do himself any favours with a poor parry of Jose Izquierdo’s cross into the path of Pascal Gross to head home from close range.

Matteo Darmian 4 – Terrible defending for the Brighton goal – we saw another example of why Jose Mourinho wants to get rid of the Italian this summer.  Jose Izquierdo didn’t have too many touches down the wing but always looked to have the beating of Matteo Darmian when he did.

Chris Smalling 7 – Can’t complain about the centre-backs as the goal came from the wing and otherwise we protected David de Gea fairly well.

Marcos Rojo 6 – Made to look a fool by Anthony Knockaert but unlucky not to have kept Pascal Gross’ close-range header out.  Made a couple of important blocks in the box and numerous clearances.  Replaced in the final 15 minutes in what was his first start in three months.

Ashley Young 5 – Beaten several times by Anthony Knockaert down the wing as the Frenchman was Brighton’s bright spark this evening.  Ashley Young offered nothing going forward this evening which has been quite common over the past month.

Nemanja Matic 6 – Brighton’s most threatening attacks came from down the wings but Nemanja Matic didn’t see as much possession as he usually does.  Still looked after it well though.

Marouane Fellaini 5 – Quiet game in the middle of the park before being replaced midway through the second half.  Was sometimes the most furthest forward on the pitch for us but never did anything of note.

Paul Pogba 5 – Forced a nice save out of Mat Ryan at his near post early in the second half in an otherwise quiet evening for Paul Pogba.

Juan Mata 6 – Some nice touches and passes but none of them in the final third.  Fired a free kick on the edge of the box over the bar.  Juan Mata didn’t create anything this evening.

Marcus Rashford 4 – Missed a good opportunity in the first half and didn’t force a save out of Mat Ryan until the 71st minute.

Anthony Martial 5 – Was our most lively player in the final third and even then Anthony Martial was too predictable when receiving the ball out on the left wing in that he wanted to cut in on his right foot.  Didn’t test the Brighton goalkeeper.

Jesse Lingard (23 mins) 6 – Came on to play the number 10 role and soon after we were able to sustain possession and pressure in the Brighton half for what was really the first time all game.  Missed a one-on-one under pressure from Lewis Dunk late on.

Scott McTominay (15 mins) N/A – An attacking change to bring a midfielder on for a centre-back.  Nothing of note from Scott McTominay in the quarter-of-an-hour that he featured.